Google Now is one of the best things that Google has ever added to Android, and it crushes its closest competitor, which is Apple’s Siri. Now can tell you when to leave to get to a meeting on time, or which route to take to get home while avoiding traffic. When you think about it, it’s kind of creepy. Ever since, it was introduced last year, rumors have been swirling about the possibility of the service coming to all computers via either Chrome or Google.com. Well, Engadget has now dug into the code of a Google page and discovered some intriguing tidbits.

Code within the webpage hints that Google Now soon may become a default service within all Google pages. The code invites people to “get started with Google Now,” as it provides “just the right information at just the right time.” The code goes on to encourage you to add or update your home and work locations because “Google Now uses your Home location to show relevant information like weather, traffic conditions, and nearby places.” Digging further down into the code, you’ll also find a plethora of references to “now_card.” 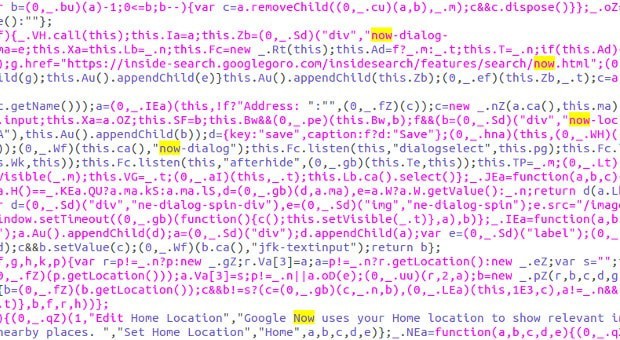 It seems fitting that Google would be working to push out Google Now to the web as the search engine giant recent announced the closure iGoogle. iGoogle was a service that allowed you to add things manually such as your favorite sports teams, weather, news, and other things to your Google homepage. As you all know, Google Now essentially all of this automatically.

This does go against previous reports claiming that Google Now would be integrated into the Chrome web browser, but it contradicts it in a good way. Bringing Google Now to Google’s homepage would open it up to the billions of people who visit Google.com every day. This could help Android grow also as people may like the service so much that they want it to be integrated into their smartphone. Hopefully it will also show people how limited Siri is in comparison to Google Now.

What do you think of Google bringing Now to the desktop? Do you see the general public being involved with it? Let us know down in the comments!