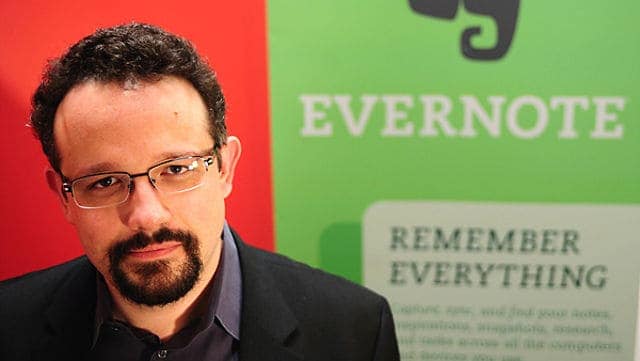 The Evernote application has met with tremendous success. We all know it as one of the best memo and note applications out there. Chief Executive Phil Libin is hinting that the company might be moving on from software, and trying out some hardware ventures in the future.

"Eventually, in a few years — three, four, five — I think we'll be ready to do something ourselves."

Libin made the comments during an interview with the IDG News Service in Tokyo. He was actually attending a conference there, as well.

Libin specifically mentioned that his company would be interested in creating a new product altogether, instead of creating something for an existing lineup. He hinted that Evernote's devices would be "new and magical." The only thing that comes to mind for me when hearing that statement is a lime green unicorn, I wonder how closely related that is to what Evernote has cooked up for ideas?

That being said, a future Evernote project could end up being something like Facebook's latest undertaking with Home. Sometimes, it's a lot easier to build upon what others have done, and that's why open source is so incredible. Although, since Libin did say they would make something "new and magical," I'm going to assume that it will be a new hardware product entirely. This also begs the question: will it be using a forked version of the Android OS?

Evernote is already familiar with hardware since they work with Moleskine on a unique notebook that's designed to run the company's software.

When you consider what Evernote does, it's not hard to see the company producing their very own mobile operating system. After all, Evernote is a pretty comprehensive app, and there are tons of unique features offered. Facebook was just a social media experience at one time, and now it's expanded into so much more. Is it truly all that hard to imagine a company like Evernote can't do the same?

Let's hope they do it better if they do venture into the hardware world though. Facebook Home hasn't met with critical acclaim from the Android world. Folks seem to be more concerned with disabling the feature than they are with acquiring it.

Advertisement
Trusted By Millions
Independent, Expert Android News You Can Trust, Since 2010
Publishing More Android Than Anyone Else
25
Today
169
This Week
276
This Month
4260
This Year
105737
All Time
Advertisement