Earlier today, we saw a sort of leak about a 21-inch HP tablet. Well it was benchmarked in AnTuTu. It was the HP Slate 21 AiO, which is probably going to be really similar to the ASUS Transformer AiO in portability and functionality. Now we are seeing another benchmark on AnTuTu for the HP Slatebook 10 X2.

Thanks to German site TabTech for picking up on this new benchmark result in AnTuTu. It appears that the Slatebook 10 X2 will be a 10-inch tablet from HP with the NVIDIA Tegra 4 processor (which we haven't seen in any device that's launched so far this year) clocked at 1.8GHz and running Android 4.2.2. If these specs are accurate and HP launches this tablet anytime soon, it'll look like they got the memo that we like the current version of Android, not an older one on a brand new device.

The HP Slate 7 has just hit the market, and is currently only available online as of late last week. The interesting thing here is calling it the "Slatebook 10 X2" wouldn't the X2 kinda mean a second generation? Considering we've only seen one Android-powered tablet from HP so far, I'm kinda confused with their naming on this one. But maybe that's just me. 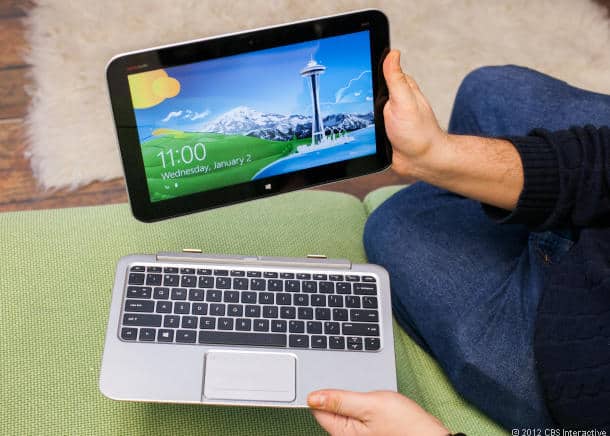 As Unwired View points out, this is a very similar name to their Windows 8-based tablet, the HP Envy X2. So far there's no word on when or if this device will be announced. But I'll be anxiously awaiting them to announce the Slatebook 10 X2, and the Slate 21 AiO, as they both look like they could be really great devices from HP. As I said earlier in the Slate 21 AiO post, it's always good to have another tablet OEM, as it will push specs up, and prices down. So let's hope HP can do something in the Android tablet space.

How many of you are waiting on a nice HP tablet powered by Android? Let us know in the comments below.

Trusted By Millions
Independent, Expert Android News You Can Trust, Since 2010
Publishing More Android Than Anyone Else
0
Today
129
This Week
287
This Month.
287
This Year
110477
All Time