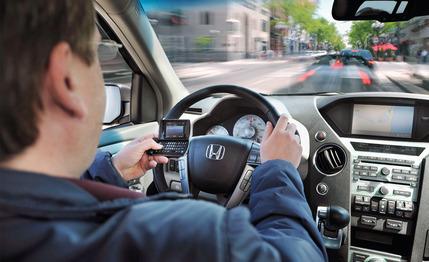 When you first see think about the differences between voice controls and physical controls, you would think that texting would be far more dangerous. I originally assumed that since you wouldn't be holding your phone, and looking at it, your concentration would be more centered on the road. Apparently not.

According to new research from the Texas Transportation Institute at Texas A&M University, using voice-activated technology is just as dangerous as physically operating your phone while driving.

The theory behind it is that using a voice application lures you into a false sense of security, making you think you are safe and thus reducing your reaction times. This makes sense in my opinion, also when you consider that voice applications require consistent concentration, whereas texting does not. Meaning that when you use voice apps, you can't flick your concentration to the road like you can with texting.

The transport institute, through the University, used 43 test subjects to prove their theory. They were all sent out onto a racetrack, some without anything to

distract them, some with texting and some with voice. They found that, on average, both the voice users and the texters had reactions times half the speed to someone concentrating.

There were also a few other reasons for the similarities once the testing was finished. They found that despite not needing to look at your phone, people still looked at their phones too often, checking the results of their phone usage. Furthermore given the current inaccuracy of speech recognition, people had to back track and correct mistakes, costing them more concentration from the road.

Chief researcher Christine Yager explains the misleading nature of voice applications. "You're still using your mind to try and think of what you're going to say, and that by proxy causes driving impairment". So even if the actual distraction to you is less, the sense of false security and the still present distraction is enough to cause significant risk to you while driving.

The UK similarly state that any use of a mobile phone while driving increases your chances of crashing 4 times over. In the US, highway agencies have created new guidelines for car manufacturers, stating that all distracting high tech features are to be deactivated unless the car is parked.

At this point I can be self-righteous and tell you not to use your phone while driving, but people are going to anyway. Instead let me just warn you, voice applications are still dangerous, and don't allow them to distract you while you're driving.