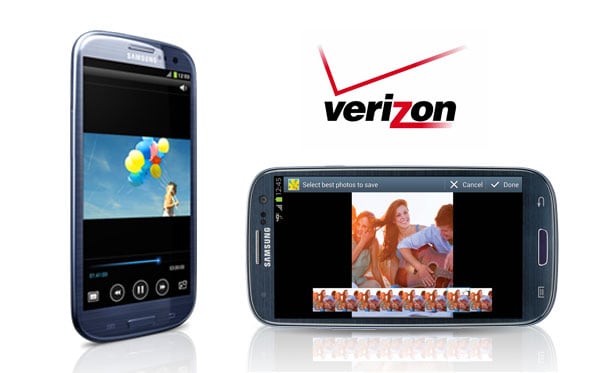 Verizon has never been known for prompt releases of Android updates. The Verizon Galaxy Nexus hasn't seen an update in what seems like ages, even though it carries the Nexus name, which means it should get updates first. Today, Big Red posted the support document for an upcoming Galaxy S III update. The good news? It pertains to Jelly Bean. The bad news? It's an update to the Jelly Bean users have already had for sometime now. It's not Android 4.2, but rather Android 4.1.2, only a minuscule change from 4.1.1. 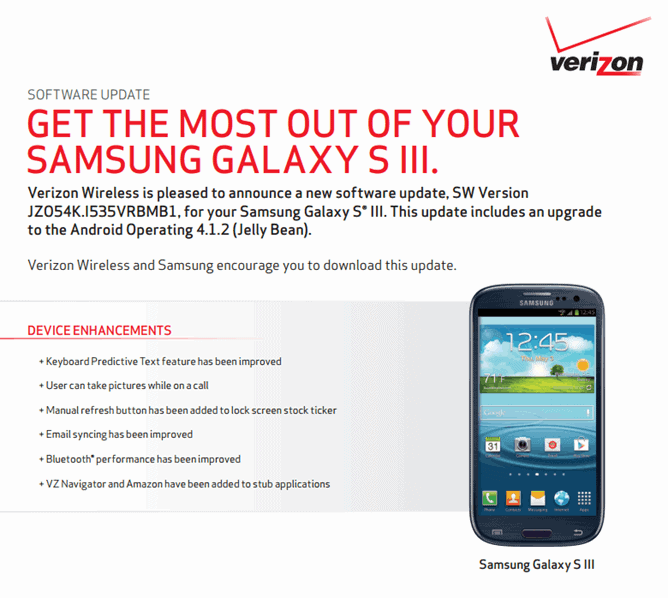 Verizon says the update should improve the keyboard's predictive text feature, while also improving Bluetooth connectivity. Other minor tweaks include the ability to take pictures while on a call, a manual refreash button on the lock screen stock ticker, improvements to email syncing, and VZ Navigator and Amazon have been added to sub applications. That basically means even more boatware. Yipee.

The update bumps the device to build number JZO54K.I535VRBMB1. Verizon didn't specifcially list a release date for this update, but generally, once the support document has been posted, the build will start to roll out to users within a week or so, with the roll out rate picking up over time. It's uncertain whether this update includes the Premium Suite features that we've seen hit other Samsung devices, but given that it's not specifically listed, we wouldn't hold our breathes.

Verizon's inability to update devices has certainly been dissapointing and frusturating to say the least. While it all can't be blamed on the carrier, we often see updates be released on other carriers, like T-Mobile, far before Big Red users see them. The Verizon Galaxy Nexus saga is just stunning, but if test builds are to be correct, it could finally see a major update in the coming weeks.

If you own a Verizon Galaxy S III, be sure to let us know when you receive this update and what changes you notice!