We are fast approaching March 14th and the big announcement that will surely shake the Android world to it's core. That's right, who's ready for the "worlds fastest smartphone"? The handset which is manufactured by Xolo…Xolo?

Yes there is another big announcement this Thursday but this one is coming out of Goa, India and from a company called Xolo, which is a sub brand of Lava International. And while we already have pretty decent idea of what to expect from Samsung this week in New York City, this other device that is coming out of India remains somewhat of a mystery.

A quick look at the company's website shows a clock counting down the days, hours, minutes, and seconds until the big announcement. While the invitation that was sent out to the media touts the previously mentioned "worlds fastest" claim to fame with the Intel logo, it also has an angled view of the device. From the picture we can only see the the top of the phone where the power button and a 3.5mm headphone jack are located. 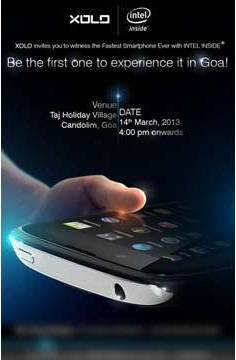 The obvious connection to be made is that this handset will be the first to use one of the Intel powered Clover Trail+ CPUs which were just announced last week at Mobile World Congress. The reasoning behind this being that the two companies have been dance partners before, most recently with the Xolo X500 & X900 using Intel's Medfield line of processors.

These CPU's which boast "industry-leading performance"  come in three variants the Z2580 (2.0GHz), the Z2560 (1.6GHz), and the Z2520 (1.2GHz), with each packing two PowerVR SGX 544MP2 GPUs for a performance boost. The guess would be that the yet to be announced device would have to feature the Z2580 in order to be the world's fastest. Unfortunately these CPUs do not support LTE radios, although they do work with HSPA+ 42Mbps modems.

It's certainly shaping up to be a pretty big week for Xolo as they also announced another smartphone this morning. The Xolo Q800 is the manufacturer's first quad core device, although it's a 1.2 GHz quad core Mediatek chipset, and has a 4.5 inch IPS panel display with qHD (540 x 960 Pixels) resolution. More of a budget handset this one has a 8 megapixel autofocus rear camera with backside illumination and a 1.2 megapixel camera in the front. The 2100 mAH battery will give this 3G only phone 26 hours of talk time.

You have to love the marketing strategy of Xolo. While everyone is looking one way at the Samsung Galaxy S IV, they throw out a wild claim of their device being the world's fastest and launching it on the same day. Even though it doesn't steal all the headlines it definitely grabs a few in the calm before the giant media storm.

Trusted By Millions
Independent, Expert Android News You Can Trust, Since 2010
Publishing More Android Than Anyone Else
20
Today
158
This Week
532
This Month.
532
This Year
110700
All Time