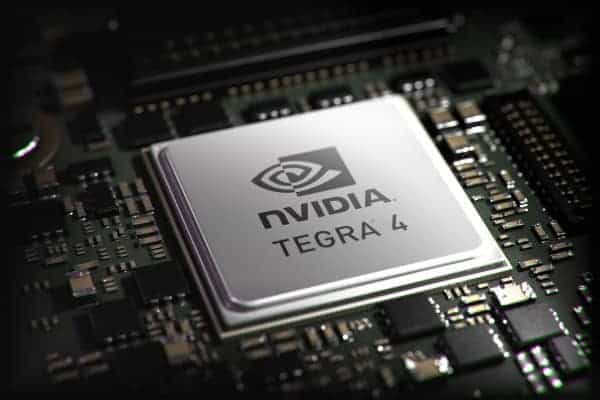 A new report from Microprocessor Report (requires subscription) says that Tegra 4 is the fastest mobile SoC right now, and it beats even Qualcomm's fastest and highest clocked SoC, the S800.

At MWC, the company continued its product reve- lation by disclosing new details of the architecture and its capabilities (as well as limitations). Judging from this pre- liminary information, Tegra 4 rates as the highest-perform- ing mobile ARM processor–if power constraints don't throttle the cores. This performance takes aim at Qual- comm's newest Snapdragon processors; Nvidia offered a wide range of benchmark results that clearly showed Tegra 4 leading both the APQ8064 and (judging from our estimates) the forthcoming Snapdragon 800 […] We also estimated the performance of the Snap- dragon Series 800, assuming that it will achieve its rated 2.3GHz clock speed and applying a 10% gain to represent the improvements from the Krait 200 CPU to the Krait 400 CPU. This approach is probably optimistic, as most bench- mark scores do not improve linearly with CPU speed, although the Series 800 will also get a boost from faster DRAM. Based on these estimates, even Qualcomm's best processor, which is due to enter production at about the same time as Tegra 4, won't surpass Nvidia in these tests.

This isn't coming as a total surprise, because we knew from early benchmarks of the Tegra 4 reference board that it has very high performance compared to previous chips, and even to the S600, and if doing some simple math, we could calculate that S800's speed bump from 1.7 Ghz for the S600 to 2.3 Ghz for the S800 was not going to give it enough of a performance boost to beat Tegra 4.

While it seems that the report is mostly focusing on the CPU performance, I believe this will be true when comparing the GPU performance, too. Not only did the Adreno 330 (found in S800) GPU not impress when they showed the demos at CES, while the Tegra 4 ones did, but from the looks of it, and from the name itself, I think we can assume that Adreno 330 is only about 50% faster compared to Adreno 320 found in the S4 Pro and the S600 SoC's.

From the latest benchmarks on Tegra 4's GPU we can deduce that it's about twice as fast as the Adreno 320, which would put it above the Adreno 330, too. I've been hoping Qualcomm become more competitive with their GPU's with the Adreno 300 series. Maybe they'll have better luck with the Adreno 400 series next year.

Now, just because Tegra 4 has the fastest CPU and GPU doesn't necessarily mean it's the best overall SoC out there. We still have to see just how efficient it is, for both smartphones and tablets. If all we cared about was performance, then we'd all be using Intel Core chips in our tablets and smartphones.

But we don't, because mobile chips have fast enough performance these days for most tasks, and what we really need to see is a comeback to making energy efficiency a priority for chip makers. If Nvidia compromised too much on power consumption just to take the leadership in performance, I don't necessarily see that as a good thing.