Skip to content
Trusted By Millions
Independent, Expert Android News You Can Trust, Since 2010
Publishing More Android Than Anyone Else
17
Today
84
This Week
111
This Month
4825
This Year
122395
All Time The Samsung Galaxy S IV is one of the most anticipated phones of the year and with its March 14th release just around the corner, the leaks are coming in thick and fast. It was only around two weeks ago when the GT-I9505; which is believed to be the 4G LTE version of the Galaxy S IV popped up on Antutu. Now we have another phone labelled as the SCH-I959 appear on Antutu. We believe the SCH-I959 will be the model name of the China Telecom CDMA version of the Galaxy S IV, because the previous incarnation the Galaxy S III had the codename SCH-I939, following the same continuity we have seen with the Galaxy S range. 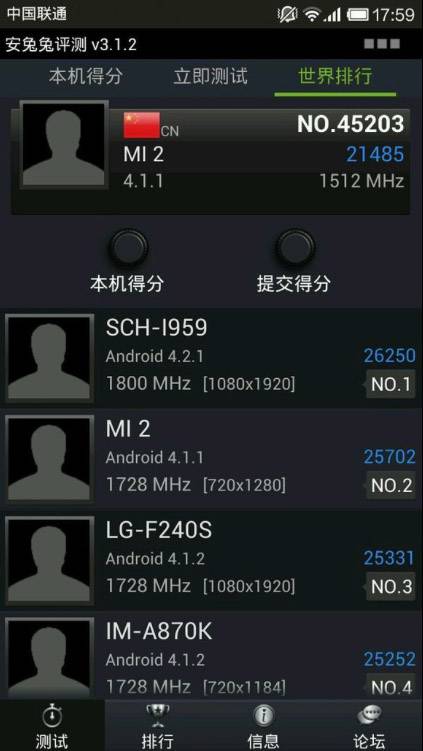 The phone is shown to feature Android 4.2.1, which is the same as the previous leak, however there are two areas where there are significant differences. On the previous leak the CPU was clocked at 1.89 GHz, while it is only 1.8 GHz for the SCH-I959, the score of the SCH-I959 is also higher with a score of 26250 compared to the 24317 despite the lower clock speed. While the score difference could be attributed to the software optimisations, the lower clock speed and higher score could also lead to the conclusion of a different chipset. The international variant the GT-I9505 will be running the Qualcomm Snapdragon 600 clocked at 1.9 GHz. Looking back at the SCH-I939, that phone featured a Exynos 4 processor and despite current supply issues with the Exynos 5 Octa, we have had claims of the European version featuring the Exynos 5 Octa. The probability of the SCH-I959 featuring a Exynos 5 becomes even more likely since initial reports suggested the Exynos 5 Octa would be clocked at 1.8 GHz, which is the same clock speed as the one shown in the picture. Another interesting point the benchmark shows, assuming they are using different chipsets for the international and China Telecom versions, with all else being equal the Exynos 5 is almost 8% faster despite a lower clock speed and Qualcomm’s attacks on the octa-core platform.

Other details to be taken away from this leak include the Full HD display that is basically required of any flagship phone released in 2013. Unfortunately, despite Samsung’s lead in the AMOLED display research and development, the S IV will most likely feature a LCD panel due to production issues when creating AMOLED displays at the pixel densities required to create a 1080p display.