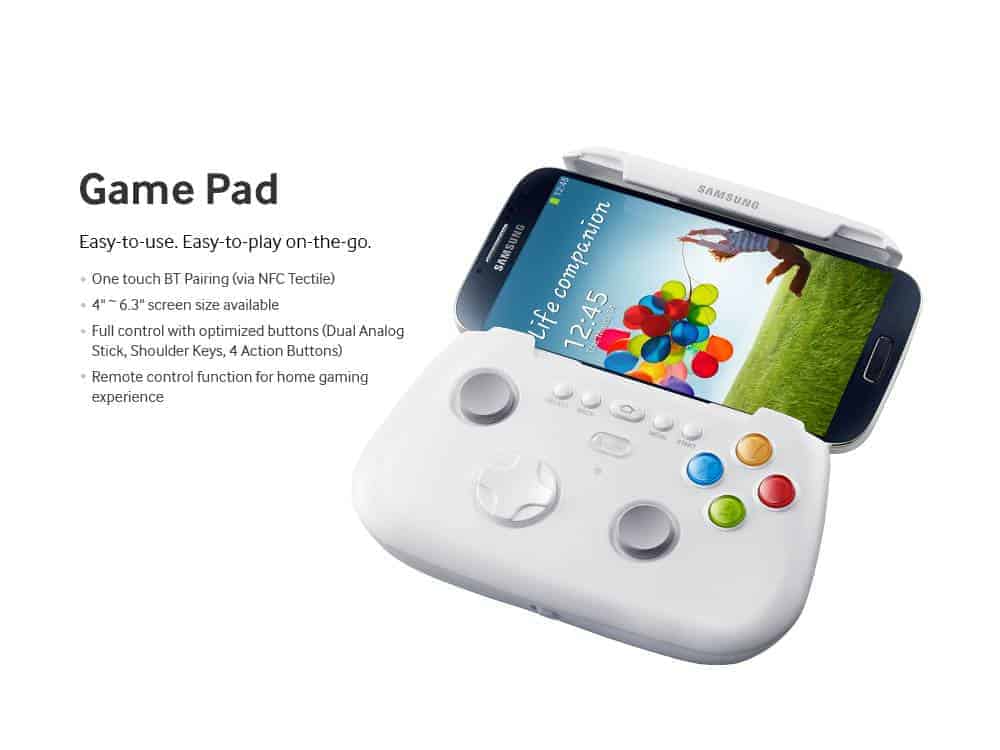 Not more than 24 hours have passed since the BIG announcement from Samsung about the S IV, Samsung's new flagship device, and already rumors are flying in about the next Note. The Galaxy Note as many of you are well aware is Samsung's phablet device line that has been increasingly popular especially after the release of the Note II last year. These rumors about the size of the display on the "upcoming" note are just that, rumors. However there is some truth in all of the chatter floating around. Most of what's being talked about today is based off of a new accessory for upcoming devices.

Right now on Samsung's S IV microsite, they have an image and listing posted for a new accessory gamepad that will be compatible for devices spanning from 4 inches to 6.3 inches. Currently there is no device from Samsung that is adorned with a 6.3 inch display, although there has been some previous talk about the next Note having a display of that size as well as a rumor of it coming with a 5.9 inch display. As rumors tend to play on our weaknesses (and by weakness I mean what we really want), most people will be leaning towards the idea that the 6.3 inch device that is described as compatible with this new gamepad will be the Note III. Whether that's the truth or not remains to be seen. Naturally though, a 6.3 inch Note is a pretty good sounding idea so who wouldn't want to believe the rumor?

All of this could have just been a big hiccup by Samsung and maybe they never intended to throw up a description about size compatibility. On the other hand maybe this is the first little piece of information they wanted to throw out there to tease the consumer. There is also the possibility that the mention of the 6.3 inch device size could be referring to a new rumored Galaxy device called the "Fonblet". Now the Fonblet is rumored to also have a 5.8 inch display and could potentially be a cellular radio equipped Galaxy player. That's a lot of if's. So for now, we'll just have to wait and see what Samsung unveils regarding the next Note. It's all very exciting though and I know a few people who would be more than happy with a phone that has a 6.3 inch display. You know who you are!

What do you guys think? Is 6.3 inches too big? Are you guys hoping that Samsung keeps the next Note below 6 inches?