There were all these rumors that Samsung was going to announce a few tablets at Mobile World Congress last month, but they only announced the Galaxy Note 8.0, which can make phone calls. But that doesn’t mean the Galaxy Tab 3 10.1 and Galaxy Tab 3 Plus aren’t coming our way soon. We’ve already seen leaks of the Galaxy Tab 3 Plus (GT-P8200) listed by the Bluetooth SIG. Now the LTE version of that tablet has appeared.

The SIG, pictured below, says that the P8220 is made for Europe, but we’ll almost definitely see it in other markets as well. The image also says that the qualification assessment date was March 6, 2013. So it arrived today. But other than that, the Bluetooth SIG doesn’t give us a whole lot of information about this tablet. The model number does fall in line with the Galaxy Tab 3 10.1 model number. 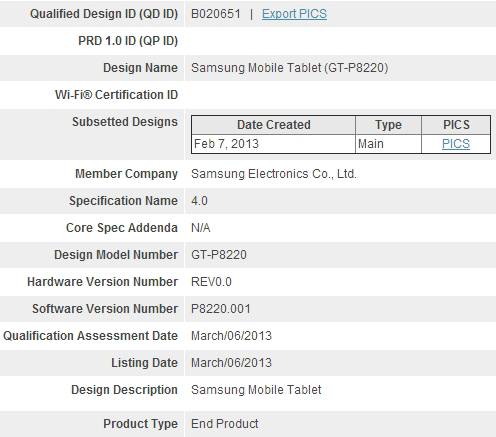 If the previous rumors of the Galaxy Tab 3 Plus remain correct, we should see it with a 10.1-inch 2560×1600 resolution, which is the same as the Nexus 10 which was also manufactured by Samsung. Which means they can just use leftover displays from the Nexus 10. Other things to look out for is Android 4.1/4.2 along with a quad-core Exynos processor. We’ll probably see 2GB of RAM as well as 16, 32, and 64GB varieties.

The Galaxy Tab 3 Plus is probably going to be Samsung’s 2013 flagship tablet. Now it could be announced next week in New York City along side the Galaxy S4, but that is just speculation. It would be pretty awesome if it was. Although we don’t know when Samsung is going to announce it, but we do know it’ll be coming soon.

How many of you are looking for a new tablet? Are you waiting for Google I/O to see what Google does with the Nexus 7? Or are you looking for a Galaxy Note 10.1, or even a Galaxy Tab 3 10.1 or Plus? Let us know in the comments below.