The Optimus G Pro is the current flagship phone for LG and is the successor to the original Optimus G. Despite having been released on the global market we haven't heard much news for when it would be released in the USA besides being sometime during Q2. The carrier availability rumours for the device have also been scarce. A recent filing by the FCC does now answer some of those questions though. The filing shows a device by the codename E980 being approved and the device will support 4G LTE, specifically the frequency bands utilised by AT&T. The E970 was the codename for the AT&T version of the Optimus G, which reinforces the belief that we will be seeing the Optimus G Pro on AT&T in the near future. 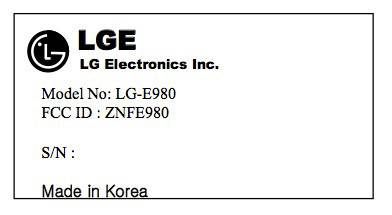 The Optimus G Pro is a formidable phone, aside from the 4G LTE connectivity, the phone will also sport a 5.5 inch 1080p display, which matches the size of the Samsung Galaxy Note II, but trumps it when it comes to resolution and pixel densities. To power all those pixels, the phone will be equipped with a Qualcomm Snapdragon 600 and 2 GBs of RAM. The Snapdragon 600 is widely regarded as the fastest system on a chip currently on the market, with a highly efficient LTE antenna and chipset to boot. The phone also features a whooping 3,140 mAh battery to power its large screen, so battery life shouldn't be an issue and unlike its cousin the Optimus G, this battery is removable.

With all these powerful specifications the LG Optimus G Pro should be more than a match for any phone on the market, however with its larger screen it may prove to be unwieldy for some, who may prefer the smaller screens offered by the HTC One or Samsung Galaxy S IV. What do you think of the Optimus G Pro coming to AT&T, do you think its larger screen and battery will allow it to sell well, or will its release be overshadowed by the HTC One and the impending juggernaut that is the Galaxy S IV?

Trusted By Millions
Independent, Expert Android News You Can Trust, Since 2010
Publishing More Android Than Anyone Else
28
Today
134
This Week
472
This Month.
7923
This Year
109395
All Time