All week long, LG has been trolling Samsung leading up to their event. They put billboards above Samsung’s in New York City, announced their own eye-tracking features yesterday, and now HTC is trolling Samsung. There are HTC reps crashing Samsung’s big day in New York City so they can show off their flagship device, the HTC One. There were at least 3 HTC reps showing off the HTC One to members of the media and Samsung fans that were waiting to get into Radio City Music Hall to cover Unpacked this evening. There were around 3,000 reporters, consumers, and Samsung partners filling Radio City Music Hall this evening. So HTC thought it was time they could introduce these people to the HTC One.

Could this stunt effect how reporters cover the Galaxy S4 event? Probably not. But as many reporters did say, it’s nice to see an Android phone that wasn’t built of plastic. Which is a direct target at Samsung. Since every phone they make is plastic, and feels kinda cheap. HTC is also pushing their trade-in program that offers users a $100 off the HTC One retail price for those that are pre-ordering the device. Which coincidentally was extended today. 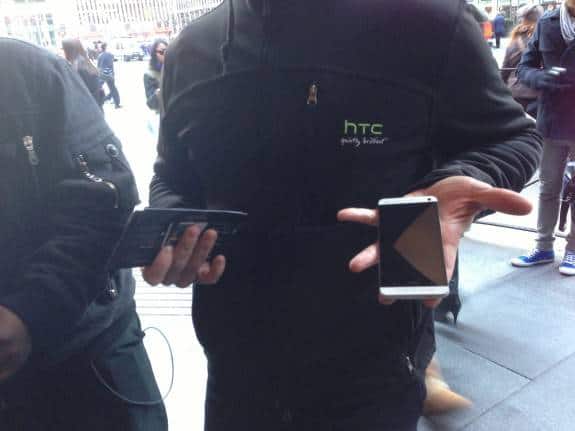 The Galaxy S4 is probably the most anticipated phone of the year, so it’s no surprise that HTC wanted to get word out about their phone at this event. And it worked. People are now talking about the HTC One a bit more than they probably would have if HTC reps were not at Radio City Music Hall this evening. So now that we know what specs both the Samsung Galaxy S4 and the HTC One have, which one will you be picking up? Or are you going to wait and see what Google has in store for us at Google I/O? Let us know in the comments below.