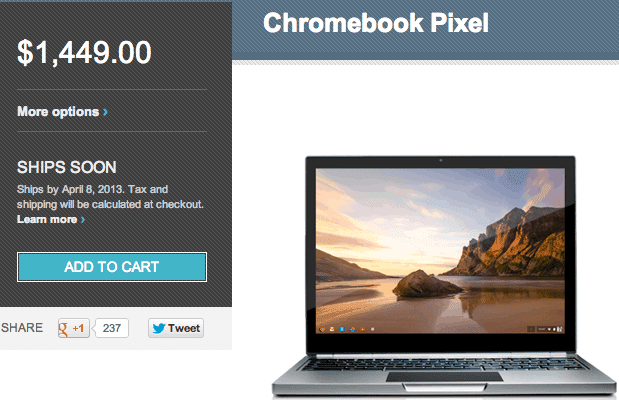 You know that Chromebook that everyone thinks Google is trolling us with? I think it's called the Chromebook Pixel. Yeah, there's an LTE version that will be on Verizon and costs $1449. It's been available on the Play Store for some time now along with the WiFi version but it hasn't started shipping yet. Now for those few that did order the LTE version, your's will be shipping by April 8th, which is still about 2 weeks away. So what are you getting for $1450?

There's a lot of good stuff in there, there's no doubt that it's got great specs. But is the OS up to par to cost more than a Macbook Pro? Probably not. I still wouldn't recommend the Chromebook Pixel to anyone looking to check out or try out Chrome OS, as the OS is just a browser and may not be perfect for everyone. But for those of you that did order an LTE enabled Pixel, it should be arriving in about 2 weeks, so you'll have to wait just a bit longer.

I have the Samsung Chromebook, while I love the device, Chrome OS still has quite a bit lacking. For instance, it's almost impossible to play videos stored locally or even on YouTube. It's constantly choppy, which is a big problem for me. But I'm still crossing my fingers and hoping that Google's Chrome team can get some of these issues fixed rather soon. As I'd love to see everyone using Chrome OS.

Have you bought the Chromebook Pixel or any other Chromebook? Let us know in the comments how you like or dislike it.