Skip to content
Trusted By Millions
Independent, Expert Android News You Can Trust, Since 2010
Publishing More Android Than Anyone Else
19
Today
19
This Week
399
This Month
3676
This Year
113725
All Time Today, somehow the folks over at Droid-Life got their hands on what they believe is the next major version of Google Play, version 4.0. We’ve seen Google Play (Android Market) go through a ton of changes over the years. Who remembers what the Android Market looked like on the original Droid or even the G1? Looked completely different from what it does now. But it appears that what you know about Google Play now is about to change, likely at Google I/O in May.

As you can see in the images above, the Google Play Store is going to get a huge UI overhaul, and it’ll look more holo-ish than it is currently. It’ll also be using a new font which looks pretty nice. Google is using text to identify different sections in Google Play. Like “Top Paid Apps” “Top Free Apps” and the rest. As you can see the different parts of Google Play are keeping their colors. For example, Google Music will still be orange, Google Movies & TV remaining red, Apps remaining green, etc. 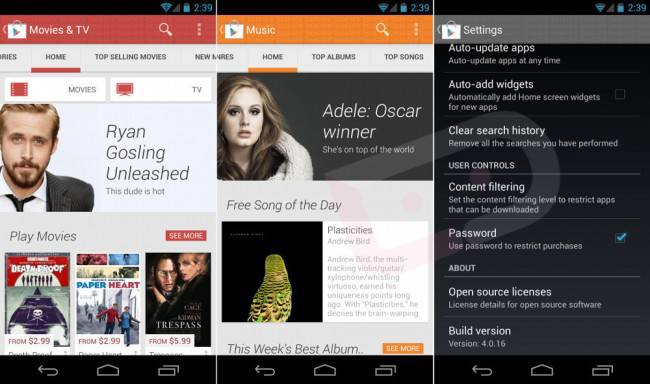 Overall the new Play Store is a bit lighter than the current one. And I must say it looks rather nice. As Kellex says in his post over on Droid-Life, there’s no telling when we’re going to see version 4.0.16 of the Play Store. He’s actually saying it could start rolling out over the next few weeks. I am going to go out on a limb and say that we’ll see it at Google I/O in May. Google usually announces changes or additions to Google Play at Google I/O, so that’s when I’m expecting it. Although, I’d love to see it sooner.