Google Keep had already gone live Sunday night/Monday morning depending on your time zone, but there were some problems which caused Google Drive outages. I was able to use it a bit before it went down. But nothing to in-depth. But it’s live again and it seems like it’s here to stay now. Google Keep is Google’s Evernote killer, okay maybe not killer. But they are looking to offer the same services that Evernote offers already. As a student, I use Evernote heavily especially during lectures. The big thing here is if it’ll be integrated into Google Drive apps on my Nexus 4 and Nexus 7 quickly, or give Keep it’s own app. Currently, it’s not integrated with Google Drive at all, aside from the URL, which could be a bummer.

Google Keep allows you to create both notes and lists. You can also add images to these lists and notes. Although adding images to lists is kinda odd. Google Keep seems to be stretching out the image to use the entire page. I’m sure Google will fix that rather soon though.

So far we haven’t seen anything official come from Google about Google Keep yet. So it may not be there for long, but it is there nonetheless. You can go and check it out at drive.google.com/keep. When Google Keep first, kinda, launched on Monday many people were upset that Google got rid of Reader for Google Keep. But as we’ve speculated already, we expect Google Reader to find a home inside Google+. After all, Google is really trying to push Google+. 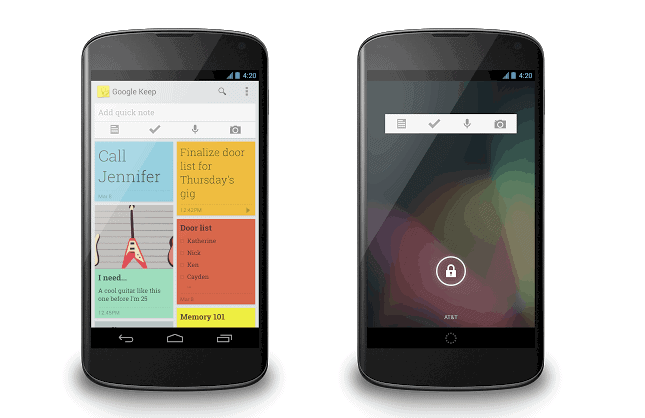 How many of you would use Google Keep instead of your current Note taking app? What note taking app are you currently using? Let us know in the comments down below.

Update: …and as soon as we write this up, Google officially launches Keep! As well as the official Android app