Google has always astounded us with the total number of users that are activating Android phones each day around the world and the latest report is no different in that regard. The way this report is different is in the sheer number of users per day increase over the report that was put out 5 months ago by Google and how those numbers have nothing at all to do with U.S. activations. Android is clearly a global phenomenon.

It has been awhile since Google announced official numbers on the number of activations per day, in fact we can go all the way back to September of 2012 before we find any word at all from Google about this or the percentage of users using a particular screen size, but today Asymco posted a follow up to that last report in September. The post leads us to believe that Android activations are now up to a number totaling 800 million from the mark reported five-months ago by Google of 500 million. This means that, in theory, Android activations have now reached the mark of 2 million activations per day globally. 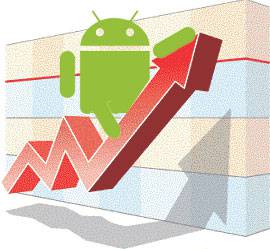 The reason that Android activations in the United States are down to only about 13,300/day can only be assumed at this point, but we have some suggestions. One of which is that the United States is one of the only countries where iPhones, which are seeing a lot of growth in the U.S., can be considered a commodity handset and can be had for $0. Also tablets, like the Kindle Fire and the Kindle Fire HD, as well as some low-end tablets such as Polaroid and other drugstore tablets, are not supported by the Play Store are not counted in these numbers. Another point that could be made is that the United States is becoming a fairly saturated smartphone market whereas some of the more populated countries around the world are much less saturated and as smartphone prices go down, the adoption rate of smartphones and tablets are growing tremendously. These are just some of the factors that play into the world outside of the U.S. having an activation rate nearly 150 times that of the United States when it comes to Android devices.

It really is great to see the mobile OS that we love so dear, growing in leaps and bounds as a whole. Have you activated an Android device lately? Whether you reside in the U.S. or not, let us know in the comments how Android has affected you as a mobile user, and how you have helped Android grow to where it is today.