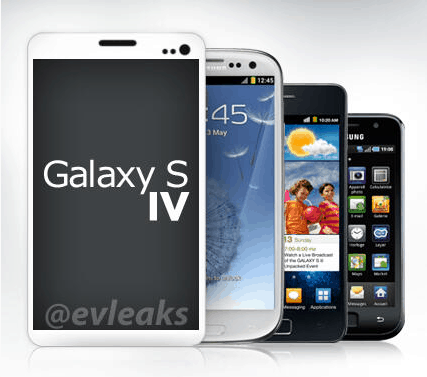 Today has been full of Galaxy S4 rumors and leaks now hasn't it? Of course, that's not going to slow down any time soon. Our favorite Twitter tipster, @evleaks has just leaked another image for the Galaxy S4. The image is shown above, it basically is showing the evolution of the Galaxy S smartphone. You've got what is believed to be the Galaxy S4, followed by the Galaxy S3, S2 and the original Galaxy S from 2010.

Now what can we gather from this image? Well it looks like Samsung has eliminated physical buttons altogether. There's also a much smaller bezel. Those that said the Galaxy S4 would have a 4.99-inch display, they were right on the money. The square shape of the Galaxy S4 seems to be about right as well, compared to some of the leaks we saw in February. Some of the other specs include a HD Super AMOLED display, 13MP camera, 16GB, 32GB, and 64GB internal storage space options, 2GB of RAM, along with Android 4.2 – Jelly Bean.

Just like with any leak, we'll be taking this with a grain of salt. If you remember last year, Samsung did a pretty good job keeping the Galaxy S3 design under wraps. But with Unpacked being just 10 days away in New York City, this could be the real deal. Even if it isn't, it's still cool to see the changes from the original Galaxy S to the Galaxy S4. Samsung has indeed came along away since 2010. Although I've gotta say the Galaxy S4 does look pretty nice, just wish it wasn't going to be made of plastic and feel pretty cheap.

Make sure you stay tuned to Android Headlines for all the details regarding the Galaxy S4 leading up to Unpacked and after the event. We'll be your #1 source for everything Galaxy S4 related. How many of you are liking the design of the Galaxy S4 in this leaked image? Let us know in the comments below.

UPDATE: It looks like @evleaks have played a cruel trick on us all, the online retailer Expansys is claiming that the renders in question were taken from their website and simple had the @evleaks logo slapped on top of them. Android Authority's  Stefan Constantinescu reached out to the retailer on Twitter concerning images on their website and this was the response he got: 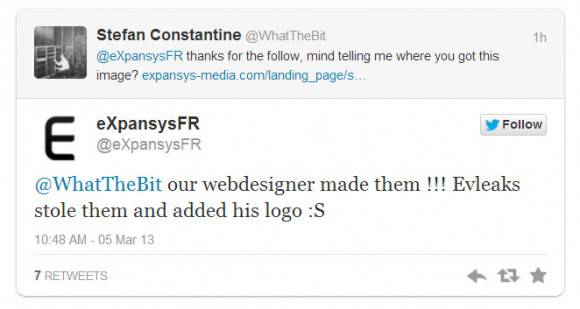 So, it'd seem that we've been duped just like others have been. We've not got too long to wait to see just what the Galaxy S IV really will look like and if one thing's for sure, @evleaks' credibility has come under question.