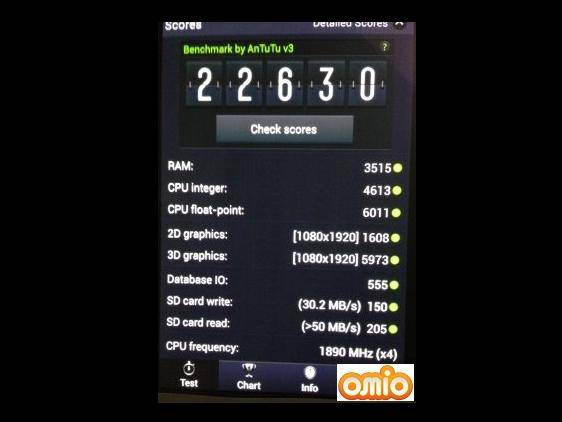 The UK model of the Galaxy S4, codenamed GT-I9505, has been benchmarked with the general-purpose AnTuTu benchmark, and its score is a pretty impressive one: 22,630. That's roughly  in the same region as the score of the HTC One, which was rated at over 22,600, too (different benchmarks tests might show different values due to throttling), but still quite a bit away from the Tegra 4 reference board's score of over 36,000. However we need to keep in mind that Tegra 4 may not be as optimized for smartphones as Exynos 5 Octa is.

Exynos 5 Octa is supposed to have a quad core 1.9 Ghz Cortex A15-based CPU, and a PowerVR SGX544MP3 GPU, clocked at 533 Mhz, which should put it at about double the performance of an iPhone 5's GPU, which has a very similar GPU, but clocked twice as low.

I've talked before about how I don't like Samsung's decision of going with an old-generation PowerVR GPU, instead of a newer Mali T600 GPU with support for OpenGL ES 3.0, or a PowerVR Series 6 GPU, which Apple is guaranteed to use this year anyway, so even if the Galaxy S4 will have similar GPU performance with the next iPhone, it won't be as future-proof as the next iPhone, and games should look significantly better on it once developers start taking advantage of the new OpenGL ES 3.0 features.

CPU wise, though, it should be a breeze for the Exynos 5 Octa to beat Apple's A7 and A7X chips. The GPU has become more and more important these past few years, in part because of Apple's promotion of GPU performance, making everyone almost forget whether the CPU performance is on par with the competitors or not,  and in part because of the need for higher and higher resolutions on our devices. But at the same time, it's important to remember that the CPU is still the most important part of a chip, and it's the thing that gives the overall performance of a device, and decides how fast your apps are going to load and function.

The Galaxy S4 rumored to arrive with a 1080p display, 2 GB of RAM, and a 13 MP camera, alongside this fast Exynos 5 processor. The OS will be based on Android 4.2.1, with a next-gen version of Nature UX on top, and some extra features that will arrive with it.