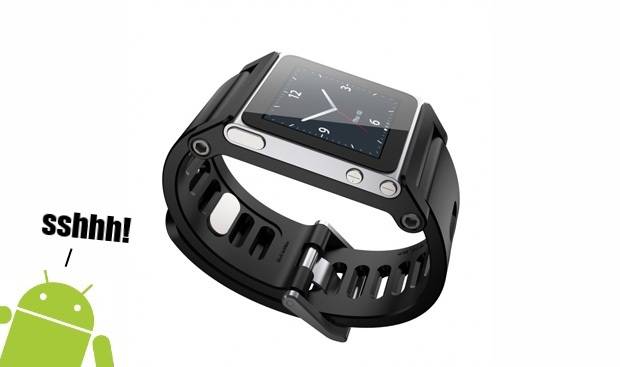 Smartwatches have actually been around for a couple of years now, and even way back before that, nerds were wearing calculator watches and even hacking them to play very simple games. I actually am still wearing my Sony Ericsson LiveView to this very day, and while it is not the most robust device as far a features go, it does provide the basic function that we are looking for in a smartwatch, which is that it syncs with the smartphone that is in your pocket and makes it so that you do not have to take the phone out to find out about that notification that you just received, or even change the music track or volume to your headphones. This year looks as if it will be the year for new smartwatches to take center stage. Just about every large mobile manufacturer has been rumored to have a smartwatch in development, and Google's Android team is apparently in the thick of this with their very own wearable creation. With basically all of the mobile competition up in arms to develop the first and the best smartwatch; what will it take to be the best, and what does Google need to do with theirs to ensure that they have the top seller and gain that real-estate atop your wrist?

There may only be one chance to get it right in the smartwatch industry, being that everyone in terms of manufacturers is going to have one. It is in Google's interest to do it big, and do it best. This means developing a watch that can do everything that we can possibly want it to do. It also means doing it in a way that has not been done yet, and getting that out first. One way to that would be to put a display on the smartwatch that will blow everyone away. Putting a 440ppi LCD display on there would be magnificent. Can you imagine looking down at your wrist and seeing walking directions or text in that brilliant of a display? Even at 1.5" x 1.5", I don't think you could ask for much more in a smartwatch screen. It would scream, "look at me" and you would.

One of the biggest selling points for device that you are bringing up against your stiff competition will be, being able to differentiate your product based on what it can do and how well it can pull it off. Google already has Google Now, and putting that into a smartwatch will be a clear leap ahead for them. This would mean that many features that others would have to put into separate apps, Google would have in one spot. We all know just how convenient Google Now is on our handhelds, just imagine what that would bring if it were always strapped to your wrist. The ability to always know what is around you, if you are on time for a meeting and the fastest way to get there, throw in voice search and you already have tons of features shuffled into the deck from the start. Another great feature that could be put atop your wrist would be NFC for payments. No longer would you even have to pull the phone out to access Google Wallet, but just a slight of hand across the NFC mat, and you are good to go. I am quite sure that there are many other features that will be going into the smartwatch of the future, and I really can't wait to see what Google will bring to the table.

The Hardware and Cost: Achilles' Heal?

This is where it gets tricky. Making a smartwatch, especially since, it has not been done successfully on a large scale; Google absolutely has to make sure that they are giving the consumer something that he wants. Quite a lot of electronics will have to go into a very small space to make a viable device that will be worn by more than just the people that have worn "smarter watches", since the calculator watch. This means making a sleek and slim device, and still being able to fit in the necessary hardware, such as microphones, a camera, and sensors galore.

All of this needs to happen, while keeping the cost reasonable. Right now, a smartwatch is not something that everyone has or wants, which makes it a hard sell on someone, the idea that everyone needs one. Most of the readers here of course, would have one delivered to their doorstep at the first opportunity, especially if it was made by Google. Like I said before though, Google would like to reach a bit wider demographic with this, and at least get about the same response as they have had for Google Glass, in a Google SmartWatch.

Will You Go Buy One?

The biggest question here is the demand. Who really wants, or needs, a smartwatch and who is actually going to buy one if they do come out? I know that I would, but like I said before, I am already a proponent of the smartwatch and know that for what I need, they do well. Convincing others that they don't neccesarily need to pull their phone out of their pocket may be a bit of a challenge though. Most people that ask about my smartwatch, are along the lines of, "yea that's cool", but why? My answers are always of convenience, but then again, it's the same answer I had when asked about my calculator watch. What do you think about a smartwatch? Better yet; What do you think of a Nexus SmartWatch by Google? Head on down and give us your thought on the matter in the comments section.