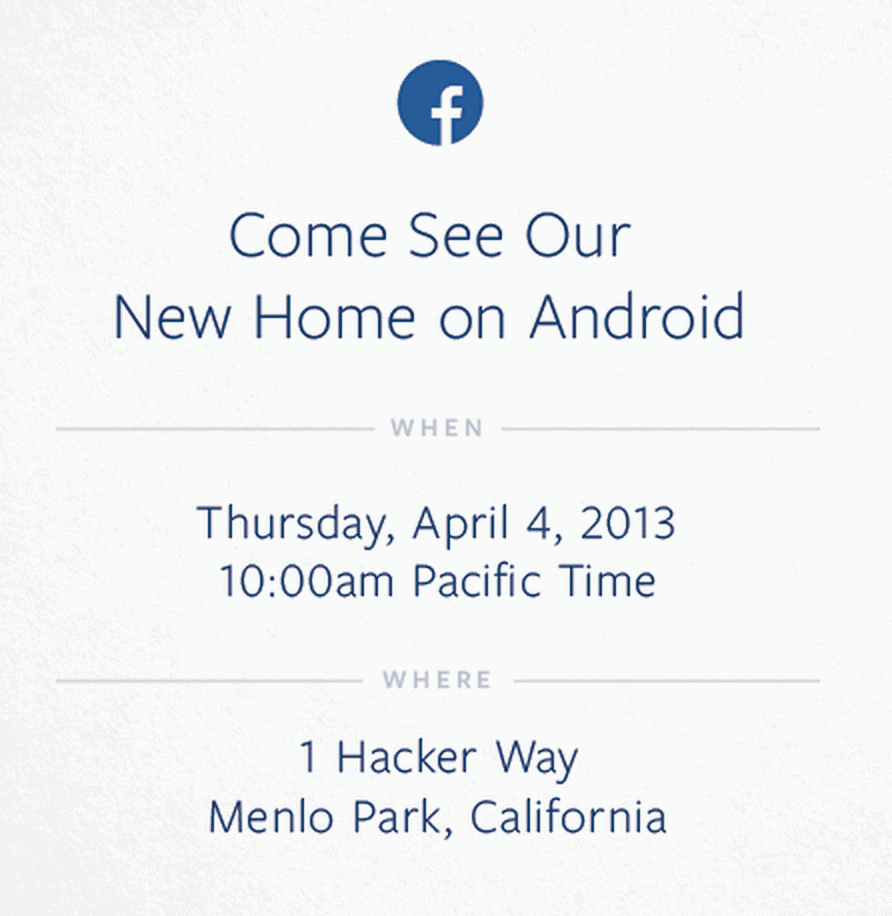 Facebook appears to have something new to show it’s Android users. They’ve just sent out invites to an event on April 4th where they’ll show off their “New Home on Android”. Now we’ve already seen leaks and heard plenty of rumors of another HTC built Facebook phone. Some of you may remember the HTC ChaCha that was on AT&T, yeah that was the original Facebook phone and looked and performed terribly. The leaks have pointed to the HTC Myst which we might meet next week at their event.

There is also some rumors of a deeply integrated Facebook experience that will be built into the devices will want to buy. Lately, Zuckerberg has been saying that building a phone is the completely wrong way to go. So this could be just a complete overhaul of the Facebook for Android app, or they could be starting it over from scratch. If they do, we’ll cross our fingers for one that actually works.

There are also some other rumors that it will be a Facebook phone with a forked version of Android. This kinda makes sense, since Facebook has been developing all kinds of VoIP features lately, which would mean people can use this without using their minutes. Which is always a good thing, especially if you’re using that T-Mobile $30 plan. With having a forked version of Android, Facebook would have more control of their phone, and can push updates out quicker. But we’ve seen their updates to their apps, and they aren’t generally good.

Something else that Techcrunch pointed out is that the start time is 10am. But shuttles don’t depart Facebook HQ back to San Francisco until 1pm, That’s an hour later than their January 15th event where they showed off Graph Search and shuttles departed to San Francisco at Noon. Which means that the hour is probably for some hands on time. So we are pretty sure we’ll see a Facebook phone from HTC on the fourth.

What do you think about a Facebook phone? Would you buy one?