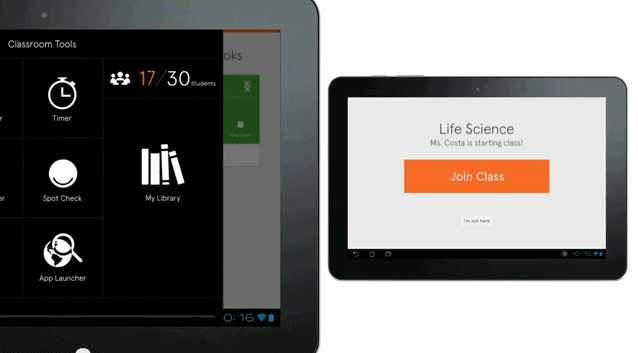 Finally the experience of learning on a tablet gets the full interest of a company. While other programs for students using tablets were available on the market (like discount prices for learning books), there hasn't been one to specially built for such a purpose. Enter the Amplify tablet. Before we go into the features of the tablet, let's talk about Amplify and what do they do. Amplify is an American company that struggles to bring a new way kids learn in the K-12, which is a for-profit organization that offers an online education platform for students and professors.

Amplify announced today at SXSWedu held in Austin, Texas the first open-source tablet operating system which is based on Android and stating:

This is more than just a tablet. It's a complete learning solution organized around the school day […] We believe it's both more affordable and more impactful than just about any other product in the education technology market.

The basic Wi-Fi only tablet comes at a price of $299 with a 2-year subscription of $99/year. The subscription provides customer care, preloaded content and various reference tools. There is also a LTE-enabled version which will cost $349 along with a 2-year contract of $179/year which will also provide the 4G connectivity (provided by AT&T) in the price of the contract. These costs will be supported by the school districts, of course.

Here are the specs that the tablet will have:

So how does it feel to use the tablet? The professor first starts a class for the group of students right from the tablet homepage.

The teacher can see what a student is using the tablet for at that moment (which kinda sucks for the kid in the back row using the YouTube app). Apps can be restricted by the teacher right from their user interface.

The class is built around a playlist of activities that can be done on the fly, or before hand by the school teacher. The playlist can include webpages as well as apps that are pre-installed on the tablet. The teacher can also check if the kids understood the current section of the class by issuing a poll or a quick quiz.

The tablet looks as if they have thought every aspect of the classroom through. The design isn't have bad either, showing clear inspiration from Google's design guidelines.

Amplify's solution for the classroom of the 21st century looks as a winner in my eyes, but for it to be successful really depends on the school system.