As many of us are sad, disappointed or mad that Google has decided that Reader wasn't a service they'll want to continue offering, even though it was a rather popular one, other RSS aggregation websites are preparing for the wave of people looking for a similar experience. Feedly is one the more good-looking ones of the pack (you can check out some of the other alternatives here) and has most of the Readers features as well.

The wave of users looking for an alternative to the soon to be dead Google Reader (scheduled on the 1st of July) have stopped in great numbers at Feedly. The service saw more than half a million users signing up on their web site (myself included), and all this in two days since Google announced the shutdown. The demand was so high that Feedly had to strengthen their Internet bandwidth ten-fold and add servers to cope with the new users.

So why Feedly? Well, firstly because they made the whole process of transferring your feeds and folders seamless and having available apps on the Play Store, Amazon's Android market and on Apple's App Store. To sign-up you can create a fresh account, or simply authorize Feedly to access your Google Reader data. That simple. No passwords to enter, no fuss and after that you have your feeds organized by folders, just like you left them on Reader. The same goes for your Android app. It will ask permission to access your account, and not open a pop-up in which you have to sign in to your Google account (and if you also use 2-step authentication like I do, you know just how annoying this thing is). 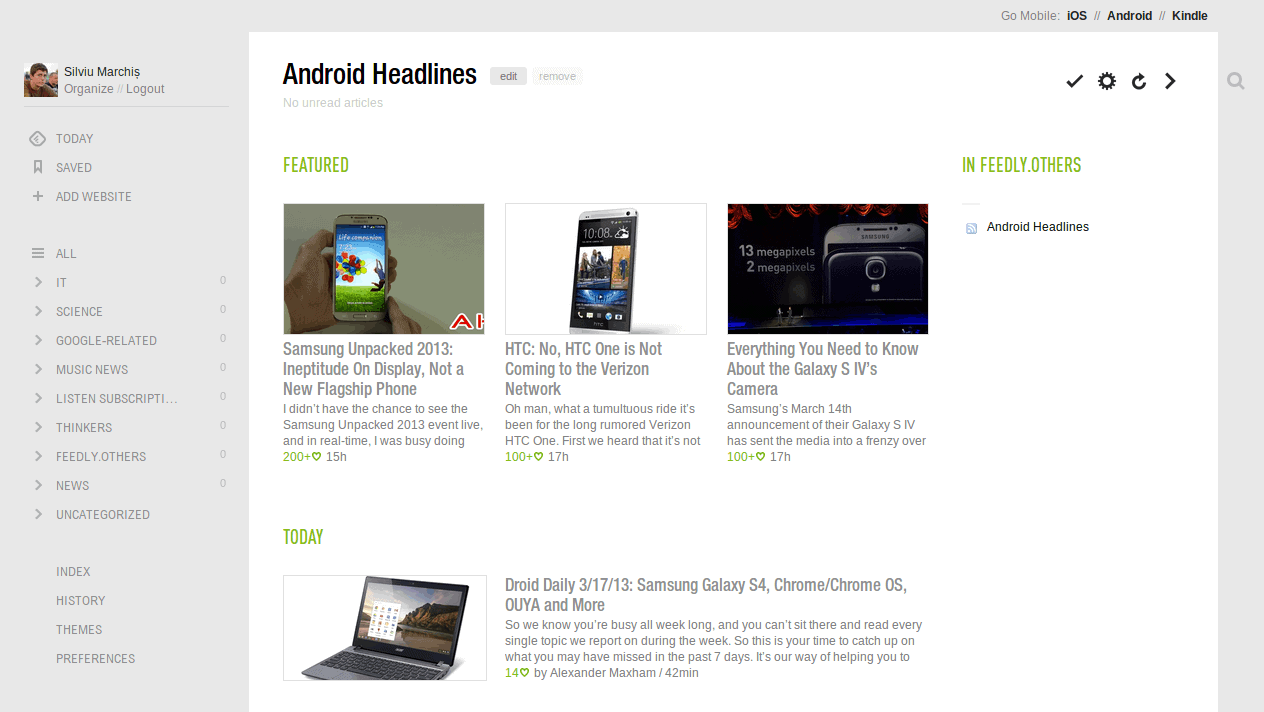 As long as we're talking about the app, I was planning to point out that the Android app doesn't have a news ticker like Google Reader had (which was the main way I read my news), but they added two widgets in the latest update (both scrollable even for versions pre 4.0, but not automatically like GReader had) which are good looking, using sometimes pictures and other times bright colors as a background.

And another thing that is not so clear at first, if you want to use Reader and Feedly side-by-side up until July, for whatever reason, you can do so and with little effort. If, for example, you add a new feed or read some articles on one of the services, the changes will be automatically available on the other one.

Even though the petition to stop Google from shutting down the service recently reached 100,000 signatures, I don't think that Google will turn back on their spring cleaning decision, so keep your chin up, and give other readers a try. Feedly, and I'm sure other similar sites, are working hard to fill the hole that Google Reader will make, accepting suggestions from the community to better address our news-reading needs.