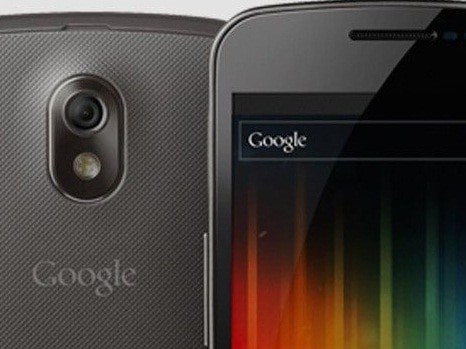 When the Galaxy Nexus was first announced as coming to Verizon, a lot of people were excited. After all, it'd be the first pure Android device to hit the Nation's largest wireless carrier since the Original Motorola Droid. And it had LTE. So, exciting stuff, right? It was, for a time. Until the paying customers of Verizon realized that Big Red were going to play the same game they play with every other Android device on their network, and drag their feet with software updates. It's hard to think of this happening to a Nexus device, they're supposed to be the devices that are updated before everyone else's and they're supposed to be a cut above the rest when it comes to updates. Well, if there were any carrier that was going to make it happen, it'd be Verizon.

Customers will note the wait to get Android 4.0.3 taking forever, and the carrier still has the phone stuck on Android 4.1.1, Jelly Bean. Now, it looks like Verizon might be finally ready to roll out the latest Jelly Bean update to the ill-fated Nexus. It's been a long time and if we're honest this makes Verizon look a little stupid. Android 4.2 was released last fall with the Nexus 4 and Nexus 10, it was then pushed to Galaxy Nexus users – with the GSM variant – and the Nexus 7. That was last Fall, it's now the end of February and Verizon have only just spoken about it, and it's still briefly at that.

Droid-Life are reporting on a tweet that was bleeted out by Verizon's support team that, well, just take a look at for yourself: 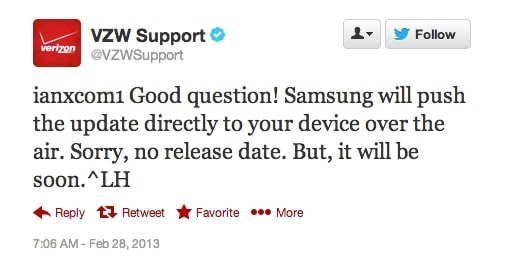 You could say that it's nice to see Verizon answering questions concerning the device but, to shift blame on to Samsung is a little worrying. After all, Samsung manage to update all sorts of device quickly and efficiently on other networks and through their own infrastructure. Raise your hand if you think it's Verizon dragging their feet with this update? Yepp, that's a sea of hands before me. There's no telling if Verizon are going to roll out an update to Android 4.2.2 or leave it at a version of Android 4.1, whichever it is though, it's better than the nothing we all expect.

So, it's good to see that an update is coming but, for those of you with a Verizon Galaxy Nexus, you're probably running some kind of Android 4.2.2 ROM anyway, aren't you? Of course you are, and while that's a really good solution to the problem, it shouldn't need to be done. Verizon should have released this update a long time ago, and I'm bitterly disappointed that they haven't done.