While we don’t know what next week will bring, we are expecting a whole lot of greatness from mobile manufacturers at Mobile World Congress. For the time being though, the HTC ONE which was revealed today and since, err sense?, has been plastered across the internet’s front pages around the globe.

This newest addition to the HTC ONE family is quite literally one to talk about and keeps giving us more reasons to talk about it. We now have some amazing processor benchmarking results that might just blow you away. The processor in question is the Qualcomm Snapdragon 600; a quad-core with its four Krait 300 CPU cores clocked at 1.7GHz each alongside an Adreno 320 GPU. This powerhouse makes a notable improvement on even the Snapdragon S4 Pro, also from Qualcomm, which powers the likes of the Nexus 4 from LG and HTC’s Droid DNA.

Just as a bit of a background on the benchmarks and benchmarking process for mobile devices; the process of benchmarking most widely accepted in the Android community is Quadrant from Aurora Softworks. Quadrant performs a series of tests that give the benchmarks of several key elements of your device; CPU, I/O, memory, and 2D/3D graphics. The results from the benchmarking of the device is then compared to other capable devices in its class to give you a perspective on your devices abilities. 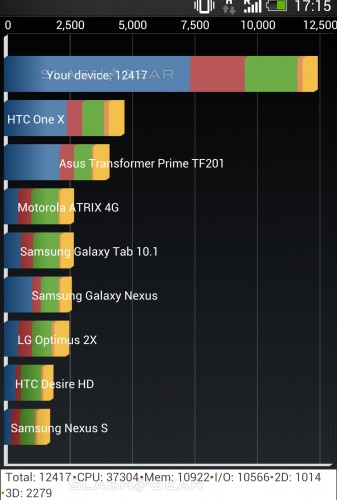 The HTC ONE definitely surprised us with the marks that it received in most every respect of the benchmarking process. In the photo at right you can see how it compares to its predecessor and a few other smartphones and tablets, but to get a bit better perspective the Nexus 4 scores around 4,900 in Quadrant, the Galaxy Note II around 6,800, and the Droid DNA nearly hits the 8,000 mark. Those devices are belittled by the HTC ONE,  who’s scores you could subtract both the Nexus 4’s result and the Note II’s result and still have a positive number.

The Quadrant score for the HTC ONE was an absolutely mind-blowing 12,417. The CPU scored at 37,304, a memory mark of 10,922, and I/O at a jaw-dropping 10,566. We have just seen the new ONE from HTC destroy anything on the charts that Quadrant has to compare it to and double most any score of its competition. These marks go above and beyond anything that we have seen on a smartphone in the past and give us much hope for the future of the Snapdragon 600.

Remember this is pre-release software running on the HTC ONE, but we don’t see the scores going down much if any. Also, coming up next week is Mobile World Congress where we will see many more devices with this chip-set. After seeing these results today, that is a prospect that we are very excited about.