There is yet more bad news for HTC, the once dominant force in the mobile handset market. According to the latest press release by Gartner, HTC has fallen out of the world’s top 10 handset manufacturers, a position it has held since 2010. This fall has lead to an 81% fall in profits since 2011, with its market share continuing to shrink, falling form 2.4% to 1.8% in the past year alone. 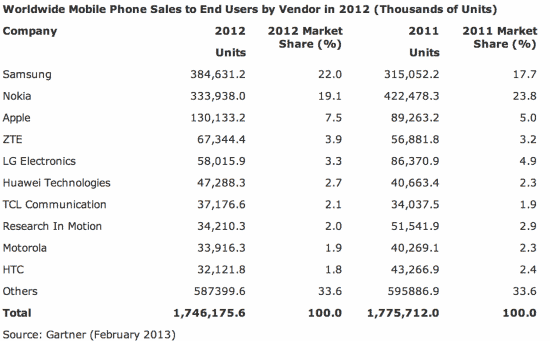 Samsung and Apple continue their strangle hold on the handset market, with their combined market shares accounting for 52% of smartphones sold in Q4 2012; compared to the 46.4% of the previous quarter; with Samsung finishing onto in the global market of both phones and smartphones. While Samsung is currently in a dominant position with enough resources to build phones for all markets at different price levels, with ” the Galaxy name nearly a synonym for Android phones in consumers’ mind share” according to Mr Gupta, reflecting Samsung’s commanding position of 42.5% of the Android market, such dominance hasn’t been seen since HTC back in 2009. However Samsung will be facing stiff competition in 2013 with rival firms such as Sony and Nokia releasing highly competitive products in an attempt to steal Samsung’s market share. 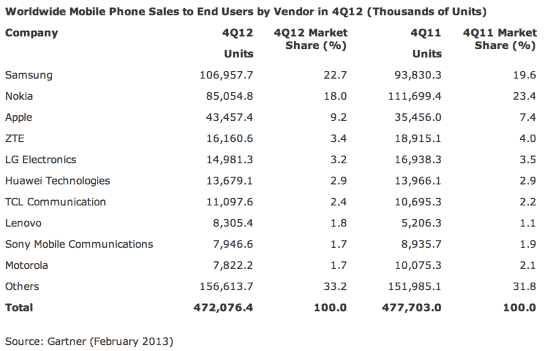 Other significant movers in the handset market are the Chinese-based manufacturers; ZTE, Huawei, TCL Communication and Lenovo, whose sales of budget low-cost smartphones has led them all to land positions in the top 10 due to large sales in developing countries; Huawei alone has seen a 73.8% increase in smartphone sales over the course of last year. We are also seeing a rebranding of Huawei away from budget devices and towards high-end premium smartphones, with the announcements of the Ascend D2 during CES at the forefront of this movement to reshape brand conceptions and increase profit margins.

Apple has also seen a 22.6% increase in sales over the past year, with consumers tending to favor the cheaper iPhone 4 and 4S over the 5 helping them to secure 130 million smartphone sales worldwide in 2012. However the iOS share of the smartphone market has fallen from 23.6% to 20.9%, while Android saw a rise from 51.3% to 69.7% of the worldwide market.

Another notable movement has been the increase of the Windows Phone, with their market share increasing from 1.8% to 3%, however this hasn’t stopped the biggest player on the Windows Phone market; Nokia from seeing a 5% drop in market share, as Nokia’s old OS Symbian falling form 11.6% to only 1.2%.

With these changes, it would be interesting to see what 2013 will bring, with the high-end 1080p phones announced at CES as well as phone launches on the horizon including the Galaxy S4, Motorola X-Phone as well as the HTC One.