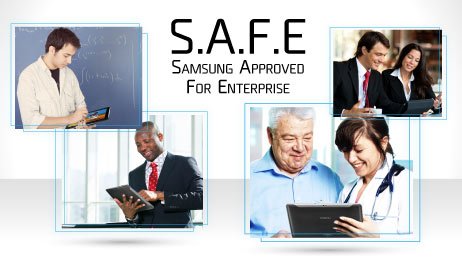 Samsung is at it again, when it comes to the business and enterprise solutions, Samsung wants to be king. They have been slowly getting louder with their roll-out of their SAFE (Samsung Approved for Enterprise) initiative.

Samsung is taking on the industry giant, Blackberry, in the enterprise space, and is actually bringing some stiff competition. Besides the most important angle, which is the actual SAFE programming. Samsung is bringing along some of their hard to dismiss ad-campaigning. The "Unicorn Apocolypse" campaign focuses on all of the ways that using a Samsung device in the business place could be the best solution for up and coming businesses and of course they mention that Blackberry is more than a bit antiquated and the iPhone just won't cut it.

"We felt that Samsung's tablets were best suited to our enterprise environment — plus we were able to make customizations to fit our needs," Maya Leibman- Chief Information Officer- American Airlines

In today's announcement, Samsung highlighted KNOX, an extra layer of AES 256-bit encryption that acts as a "container system" that will keep the user and business tools separated (much like BlackBerry Balance). This will include most every aspect of the system and will be able to be used on applications. KNOX supports many current IT policies and will improve the mobile device management controls. Knox will also be able to create a separate VPN (virtual private network) for an application. Samsung touts KNOX as being ready to work for government agencies, even the defense department, with all of their security requirements being met. KNOX will be native to the OS and addresses all of the security gaps in Android, according to Samsung.

Given all of the features and benefits of SAFE, Blackberry is not fazed by the initiative.

"Whatever any of our competitors announce, one thing won't change. The most secure mobile computing solution is a BlackBerry device running on a BlackBerry platform." – David J. Smith, Executive Vice-President of Mobile Computing- BlackBerry

BlackBerry has created a strong-hold in the business and government agency space over the past decade and has recently been heralding that 3,500 businesses and government agencies in North America have been evaluating BB10 and BlackBerry expects most to adopt their new OS. That number has actually doubled since the official announcement of BB10.

Samsung hopes to nab many of these businesses and organizations from the grip of BlackBerry. As a fledgling to the enterprise environment it wouldn't take many to get a foothold in the enterprise space and we all have seen how Samsung responds when they are given an inch. Samsung recently gained the business of American Airlines and hopes that this latest roll-out of business related offerings will feed the fire for more enterprise organizations to heed Samsung's enterprise solutions.