One major qualm that users have had with the LG Nexus 4 since its release day has been with the display colors appearing washed out or dull. This goes back to some of the very first reviews that made their way on to the internet. There have even been reports that these color discrepancies are worse than on the LG Optimus G which has the same display, and they are different. LG and Google each used a different color calibration for their kernels making them appear completely dissimilar in terms of color clarity and saturation. Since the first third-party ROMs and Kernels for the device, developers have been working to fix this issue through a combination of Kernel tweaks and applications that allow the user to adjust his own colors. None have come nearly as close as Paranoid Android has with its latest revision of PA for MAKO. 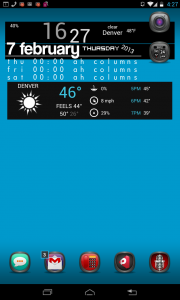 Many users to buy the Nexus 4 came from the Galaxy Nexus, the Galaxy SIII, or another AMOLED device. Moving from AMOLED to an IPS display can be unnerving to say the least. The colors look dim and washed out, and are just not as pleasing to the eye as the blackest blacks and the contrast of an AMOLED display. Paranoid Android has come very close to matching that contrast in the latest PA 2.99b+. The developer touts, “Truest colors you’ve seen on Mako”. This latest Paranoid Android version accomplishes this by combining elements from both Google’s and LG’s presets, where other solutions that we have seen have built on one or the other. This has created a PA experience with some of the blackest blacks and whitest whites and all the while it does not over-saturate the colors. Making for an extremely true and eye pleasing color calibration on the Mako.

I personally, for a bit over 24-hours now, have been running the latest revision of the PA Contrasty Kernel (Rev 2), that is actually what it is called. From the first time that the device booted into PA with the 2nd revision kernel, I could not believe that I was seeing the same device. In my opinion, the colors and contrast look almost identical to the Galaxy SIII and maybe even better than the Galaxy Nexus.

Paranoid Android is among the most popular ROMs flashed on the devices that are supported by PA and among the first ROMs to be ported to new devices that the developers of PA do not officially support. I personally have been using PA since before it was officially supported on the original Galaxy Note and have flashed it to every device that I have owned since. Their work on the Nexus 4 though, has been second to none. I do recommend that everyone familiar with rooting and ROM flashing give this one a try and tell us what you think in the comments.

*There are inherent risks involved with rooting your device as well as with flashing 3rd party kernels and ROMs. Do your homework and use extreme precaution and common sense when flashing.