This chip, codenamed Grey, has been leaked for more than a year. But now Nvidia is finally making it official. The chip will be called "Tegra 4i", even though it has little to do with Tegra 4 itself considering it doesn't have anything similar of the CPU side, but it does use almost as many GPU cores as Tegra 4, and it also comes with the HDR accelerator, now called Chimera.

Tegra 4i will have a quad core 2.3 Ghz Cortex A9, or at least that's what Nvidia says. When they usually promote a chip like this, the advertised clock speed is only for the first core, while the others are a little underclocked by 200 Mhz or so. I hope this isn't the case here, but it's very likely they did it again. I have no problem with them doing that as long as they are transparent about it, and are not advertising it as "quad core 2.3 Ghz", when they know people will understand "4 cores at 2.3 Ghz" from that.

It's not fair to the consumer who buys something else than what he believed it to be, and it's not fair to the competition that actually puts all cores at the same clock speed, and may suffer a disadvantage (compared to Nvidia) in terms of battery life for doing that, but they'd rather not be misleading, and just offer the product they are advertising. I hope I'm wrong in assuming this, though, so we'll see when we get the chip if they are actually all at 2.3 Ghz or not.

The integrated LTE chip is the Icera i500, the soft-modem that could change the modem industry, considering it's all done in software, and it can be upgraded to support many frequencies. In fact initially the chip will arrive with LTE Category 3 speeds (100 Mbps), but will later be upgraded to support LTE Category 4 (150 Mbps), which is also being called "LTE-Advanced".

This LTE integration will ensure a smaller (and lower cost) chip, and also higher power savings. This seems to be needed especially for smartphones, although it also comes with a disadvantage, not just for Nvidia, but Qualcomm and others, too. It significantly slows down the appearance of the chip on the market, which is probably why Qualcomm didn't wait around to integrate LTE in S4 Pro, and just launched it to market as it was in Nexus 4 and other devices.

It should take a while until these companies can make the integration much faster, or they can just add them to every other generation product, which is probably what Qualcomm will do. If Nvidia doesn't do the same, then they might always be one gen behind with their integrated LTE chips. 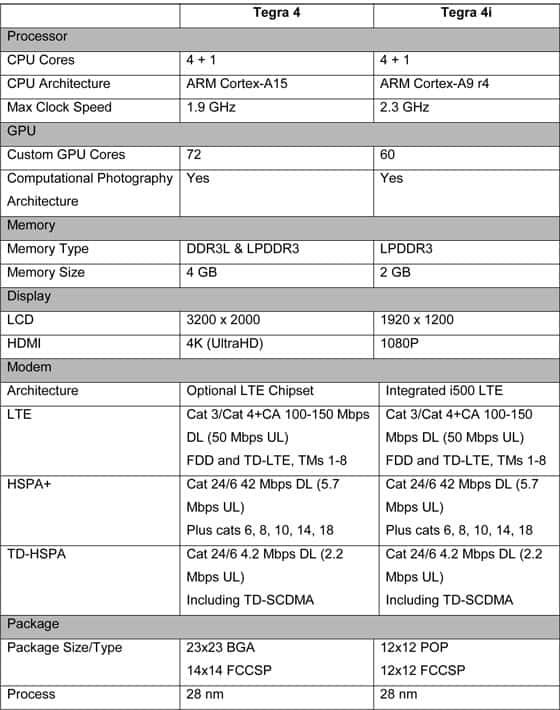