With MWC right around the corner, there's going to be a lot of Android news flooding the Internet, and if you thought this was going to stop the flow of Galaxy S IV rumors for at least a little while, then you were wrong. When a phone's launch is this anticipated it's no wonder that leaks and rumors are surfacing all over the place. We've heard some information and some benchmarks to suggest that Samsung won't be using their own Exynos chips at the heart of their latest flagship but now, we're hearing something else as well. That Samsung might not be able to ship the Galaxy S IV with an AMOLED type display, as they have done with every other Galaxy S smartphone in the past.

Sammobile is reporting that a "contact" of theirs is telling them that the device is going to come packing a 1.9 Ghz Snapdragon 600 CPU, just like the HTC One, and that there's not going to be an AMOLED display at the heart of this flagship. Instead, they detail a 4.99" SoLux LCD panel with a resolution of 1920 x 1080, Samsung make a lot of screens and AMOLED is not the only type of display that they can offer, but will they be happy to ship their flagship device without their trademark AMOLED display? I don't think so, after all it's one of the biggest things that sets them apart from others in the market. Having said that, Sammobile are reporting that the Korean giant is having problems producing AMOLED displays in enough quantities for such a massive product launch.

Their contact has given them some more information and they firmly believe the following specs to be true:

They've also got a leaked image to go along with it but, this could be any phone out there with a custom boot animation: 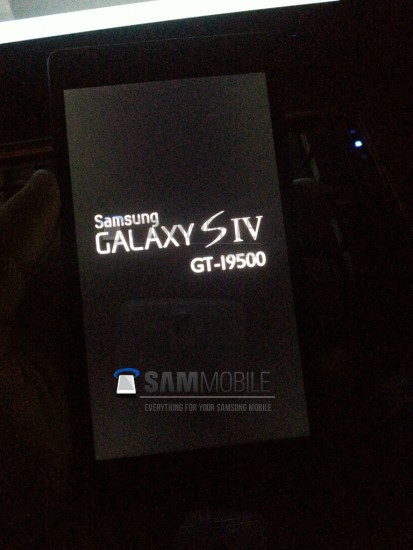 Overall, I'm not sure what to think about the Galaxy S IV's internals, the inclusion of the Snapdragon 600 CPU is something I can see happening, we all know that Qualcomm can deliver the best LTE chips out there and the Exynos Octa seems like a far-off dream right now. The eight-core chip was announced at CES but, there were no concrete plans laid out. AMOLED is something that Samsung have relied on as a big seller for their smartphones over the years, I think they'll announce the Galaxy S IV with a stunning display no matter what but, if the Galaxy S IV doesn't come with AMOLED it could signal their moving away from the technology.

Trusted By Millions
Independent, Expert Android News You Can Trust, Since 2010
Publishing More Android Than Anyone Else
0
Today
61
This Week
439
This Month.
439
This Year
110617
All Time