It’s not surprising that when an update for Android is pushed out to Android devices that there’s a flurry of activity throughout coverage of Android news. We all want to know what’s been changed, what’s gotten better and if anything, what’s gotten worse. With the update to Android 4.2.2 for Nexus devices, we were all looking for a couple of fixes to niggling problems. Namely that nasty WiFi bug on Nexus devices and Bluetooth sputtering when streaming. While those problems seem to have been fixed, there have been a couple of other changes as well.

One of those changes for the Nexus 7 seems to squeeze a little more out of the battery, Google are now listing the Nexus 7 as having an estimated 10 hours of active use, which is up from the already respectable 8 hours. It would certainly look like Android 4.2.2 is at the heart of this increase in battery life. Personally, I’ve noticed a few differences on my Nexus 7 but, I’ve not been running the update long enough to keep an eye on battery life. Seeing this though, means I’ll be taking a closer look at how my battery does over the next couple of days. 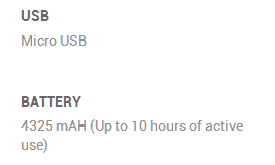 It’s good to see Google improving their devices like this, it might only be a small improvement but, battery life is something that’s very much on Google’s mind. Larry Page is forever lamenting about having to recharge our smartphones and tablets throughout the day and I think we all want more out of our batteries. I know that I could do with a much longer battery life on my next Android smartphone. While Android hasn’t always been known for its great battery life but that seems to changing pretty damn quickly and we’re hoping that Key Lime Pie is going to come with some serious optimization when it comes to power consumption.

So, how has the update been running for you? Has anything changed noticeably for you, have wrongs been put right? What about the battery life? Let us know in the comments.