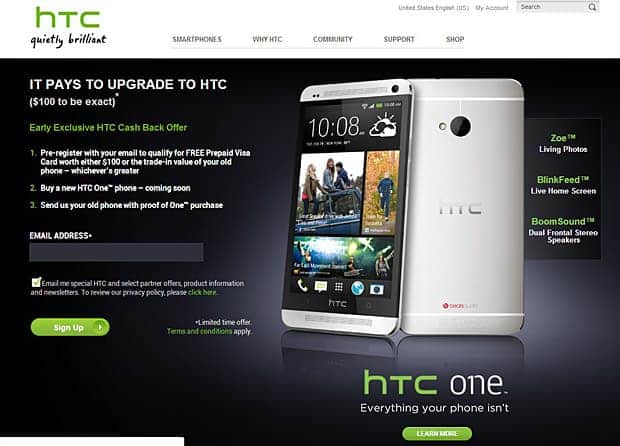 Now that we know the HTC One is officially coming, as if we didn't already know before it was confirmed, it's clear that there are going to be a lot of folks clamoring to get one (no pun intended). It's a beast of a device, and it's certainly exciting for HTC fans and Android lovers alike. This is HTC's big chance to get back into the mobile game, and steal some of that market share away from Samsung.

Regardless of what you decide to get for your next device, you have to do something before you can actually move on. The first thing you have to do is take care of your old device. Now, lots of people sell them on the internet, or elsewhere, to regain some of the value they invested. Others keep the device as a backup, which is something I usually like to recommend especially if you don't have any backups lying around.

HTC has started a new program that aims to help you with that decision. It's going to give you an incentive for trading in your old device, which most carriers fail to do. All you have to do to qualify is register your email address via the related page, and then get an HTC One as soon as it's available (of course).

It seems as though HTC is taking some potshots at competitors with this ad, maybe their marketing is going to be a little more aggressive from here on out? Phrases like "it pays to upgrade to HTC," and "everything your phone isn't," stand out significantly.

The trade-in program is pretty straightforward, HTC is going to reward you with $100, or the trade-in value of your current device, to go towards the price of a new HTC One. All you have to do is pre-register your email address, and when it's time the process to get your money will go something like this:

It's not a terrible plan at all if your device is worth less than $100. As it would seem, $100 is the max amount of money you'll be offered for a trade-in, which means if you can sell your device for more than that, you would be much better off doing so.

I think trade-in programs like this are certainly a good idea, but I always find it amusing when companies low-ball you in regards to price. Then again, I doubt we'll ever see a trade-in program that allots you the true value of your old device. They are still trying to make a profit, after all.

It's like when Gamestop buys your used games for $5, and turns around and sells them for $20.

I digress. The real story here, is that for any folks out there that don't want to bother selling your old devices, HTC is giving you the option to trade them in. There's no mention about whether or not the program is limited to just old HTC devices. In the terms and conditions however, it does explicitly state that you must have a device supported by their trade-in tool.

In order to participate in the HTC OneTM Upgrade Program you must have an eligible used device as defined by the on-line Tool. You can identify if the used device is eligible by utilizing the drop down menus to pick the make, model, and carrier for the used device.

The Tool will reflect the value of a used device based upon the manufacturer, model and condition of the device ("Trade-in Value"). The Tool will generate a receipt which includes an acknowledgment by you that (1) you understand you are selling the device in consideration for the Trade-in Value; (2) by accepting such Trade-in Value, you are giving up full ownership rights to the device; (3) you understand the device will not be eligible for return; (4) you are responsible for removal of all personal information before relinquishment of device; (5) you have been advised of any return policy regarding the purchase of a new device or accessory with the coupon; and (6) you are responsible for deactivating the used device and ensuring you retire any outstanding balance.

Also, this promotion is only available for residents in the U.S, who are 18 years of age or older.

What do you think? Is anyone out there willing to trade-in their old device for an HTC One?