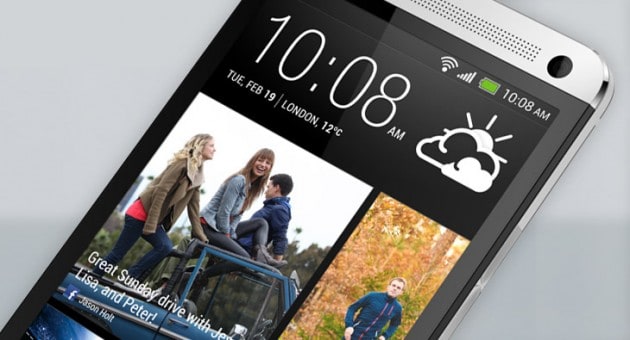 Today, HTC announced their new 2013 flagship device, the HTC One. The first thing you'll notice about Sense is that it looks completely different. If you take a look at the picture above, you might think "what the heck is that?" because it looks nothing like Sense of the past. HTC tried to tone down Sense again, which they tried last year with Sense 4. They did a good job of that in 2012, but they need to get rid of it altogether in my opinion.

As you can see, HTC really worked on toning down Sense in version 5. One of the most notable new features is BlinkFeed. This is a news service, similar to Flipboard that creates a live stream of content right on the home screen. Now users can connect to their favorite social accounts including Facebook and Twitter and subscribe to both local and global content from over 1,400 news sources. When you first start up BinkFeed you'll probably think it's HTC's stab at Google Now, but it isn't. HTC has spend a lot of time creating a unique experience and they have a roadmap in place to keep improving the service. HTC will also be providing a software developer kit so that developers can tie their apps into BlinkFeed.

Then there's HTC Zoe, which allows the user to capture high-res photos and videos at the same time. This is a unique camera mode that will let you record a brief moment in time that can be used later to save the perfect picture or relive an experience years later. These Zoes are just 3 seconds long, almost like Twitter's new Vine app which is an iOS exclusive right now. But HTC has included a tool that automatically creates a 30-second long highlight film that sets your photos and video to music with professionally designed cuts, transitions and effects. They have also included a pack of different themes that you can use and instantly create a remix video with the tap of a button.

In the past, HTC has been putting Beats Audio by Dr Dre on all their devices, the One is keeping the focus on sound once again. HTC BoomSound brings for the first time to a phone, a pair of front-facing stereo speakers with a dedicated amplifier. Now we've seen Samsung doing this on their tablets, including the Nexus 10 which has two front-facing stereo speakers on the left and right sides. So it's cool to see this on a phone now.

There's also another new feature called HTC Sense Voice, which automatically boosts the call volume and quality when you are in a noisy environment.

The HTC One actually features and IR blaster that's built into the power button on the top of the phone. Which after a quick setup can be used to control most TVs and set-top boxes. We've seen Samsung put this feature in their Galaxy Tab lineup, but it hadn't really caught onto smartphones yet. It really looks like HTC is taking a lot of pages out of Samsung's book in this release.

Then there's HTC Sense TV, which is an app that provides interactive program guide that is powered by Peel. Peel is also already on the Galaxy Tab, but didn't do to well with Samsung. So it's nice to see Peel making a comeback into the game. Smart remote apps still feel like a niche market though, but HTC might be looking to change that.

So that's all that's new in HTC Sense 5.0. It doesn't seem like a lot, but there is a lot of great features for the HTC One. Make sure you stay tuned to Android Headlines all day long for more coverage of the HTC One, and tune into the AH Show tonight at 7pm EST/4pm PST for our special podcast about the HTC One, and you'll get to hear all our true, unedited opinions about the new device and new version of Sense 5.0.