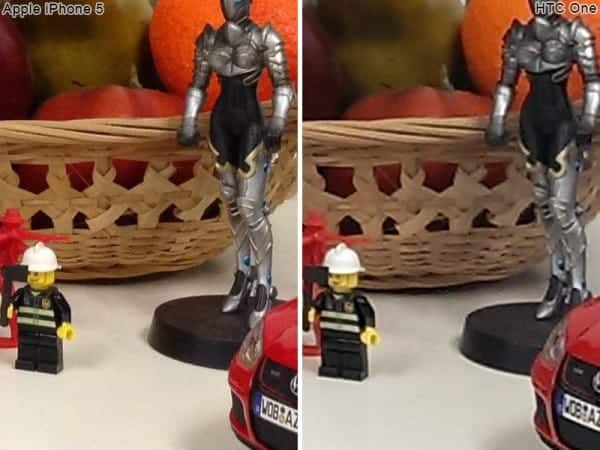 It seems HTC One may not have as good of a camera as they let us to believe, according to some tests GSMArena did against the iPhone 5. Virtually all HTC One's photos look worse than the iPhone 5 ones, except when it comes to color an the way the sunlight shows in the picture (thanks to HTC's live HDR, which I think is a great feature all cameras should have, just like OIS). So where did HTC go wrong?

It seems HTC's mistake was not using bigger pixels per se (that's a good thing by default), but using *fewer* pixels to get those big pixels. If they would've kept the same 8 MP resolution, but make the sensor large enough to make all those pixels 3x bigger, then they would've had the better camera by default. But instead they kept the same tiny 1/3" sensor everyone uses, and they just used a 4 MP resolution.

Plus, how exactly did HTC use an "8MP sensor" to create this? Doesn't that just mean they basically "hacked" the sensor to show 4 MP, and it's not even a native 4 MP camera? There might be some problems with that idea, too. Perhaps if it was a native 4 MP camera, it would've looked better than it does now.

Either way, I stand by the idea that phones need to start racing for "who has the bigger sensor size", just like they did for screens. And they do need to get larger pixels (they are going to be very close to the minimum pixel limit with a 13 MP camera on a 1/3" sensor, anyway). It's just that they probably shouldn't compromise on the 8MP or so resolution either. And the only way to do that is to increase the sensor size.

More companies should also look into pixel-binning/oversampling (like on the Pureview 808), and there you also need a huge sensor by default to pull it off. So it seems pretty obvious to me that they are going to need to increase the sensor size either way, if they want to get good gains on camera quality in the future. It doesn't seem, however, that it's that obvious to most companies right now.

They have to keep in mind that with pixel-binning there are also pros and cons, though. Pros: you probably get higher detail, and you get lossless digital zoom of 3-5x or so (you don't get as much pixel-binning, as you increase the zoom). But you also probably don't win much in low-light sensitivity, you need longer exposure times (but this may have become good enough with today's "zero-shutter lag" cameras), and a very fast image accelerator to deal with all that high resolution and data, and process it very quickly (again something that is going to be solvable in the near future).

Either way, I want to see more outside of the box thinking with phone manufacturers in regards to cameras. I'm tired of the "last year's camera was 5 MP, let's make it 8 MP this year, 13 the next, and 16 the one after that". That status quo needs to stop. They can get much better gains in quality by thinking about new ways to do it.

It's also time these phone manufacturers start hiring some of the best camera engineers they can get from companies like Nikon and Canon. I'm sure some of them would be excited at the opportunity to "revolutionize" camera quality in a very high growth sector like smartphones that is poised to kill the point and shoot market in the next few years anyway.