Whenever the Galaxy S IV is going to be talked about, you need to realize that expectations are lofty, unrealistic and often wrong. Samsung's latest phone is a pretty big deal not just for them but, for the whole Android landscape. After all, Samsung are dominating Android right now in sales and the Galaxy S III isn't going to be an easy act to follow. Samsung are going to have to meet expectations as well, otherwise their stock might suffer like Apple's did recently.

Processing power in our pockets has risen exponentially in the last two years and even from the Galaxy S III, the quad-core S4 Pros that are roaming the place are making laptops look slow. There's been a lot of speculation as to whether or not the Galaxy S IV is going to ship with Samsung's own Exynos 5 "Octa" which, as the name would suggest, comes with 8 processing cores. Recent benchmarks that are slowly coming out of the woodwork, would suggest another Snapdragon S4 Pro variety. We covered a benchmark of a device that could be heading to Korea with a quad-core 1.9 Ghz CPU that looks a lot like a Korean Galaxy S IV.

Now, a benchmark has surfaced on Nenamark, of a Samsung device with the same sort of processor that should be headed to Verizon's network. The device's name is Samsung SCH-I545 and just like the previous benchmark we covered, it's packing a resolution of 1920 x 1080, an Adreno 320 GPU and a 1.9 Ghz Quad-Core CPU. While the benchmark doesn't give us any more information than that it gives us an insight into what the Galaxy S IV should be packing in it. 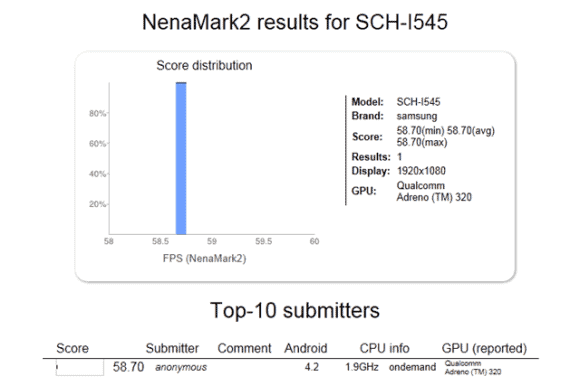 We've spoken about the use of Samsung's Exynos 5 Octa before and while it might be a disappointment to some to not see if inside the Galaxy S IV, there's absolutely nothing wrong with a quad-core processor pushing those sort of speeds. If you thought the Galaxy Note II was fast, this is going to murder it. It's a little bizarre to see Samsung using Qualcomm's chips instead of their own Exynos processors but, just like with the Galaxy S III, this could have been done for LTE purposes.

Whether or not this is the Galaxy S IV, it makes for a speedy device and I'm sure most of you ready this would be okay with a device packing those sorts of speeds, right?