When talking about budget Android tablets, there’s always a sour taste left in my mouth. Not because there isn’t a place for affordable tablets – just look at the Nexus 7 – but, because build quality almost always flies out of the window whenever a manufacturer tries to make and market budget tablets. Most of us don’t need all the power of high-end performance chips, especially not if all we’re doing is browsing the web and watching the occasional video. However, that doesn’t mean that a budget-minded tablet should be built poorly, or with low-grade materials. I think you’d all agree that you’d be inclined to buy a lower-cost tablet if it was built well and felt good.

ASUS look set to break the mold when it comes to cheaper tablets. As they proved with the Nexus 7, there’s no need to sacrifice good build and design to justify a lower-cost. With their rumored 7-inch FonePad tablet, they might be readying something a little special for those that are more budget-conscious. We’ve heard a little about ASUS’ latest tablet in Android news as of late but, a leaked image now gives us a little more to go on. As you’ll see in the photo below, the FonePad could well come with a metal chassis, and a minimal design. 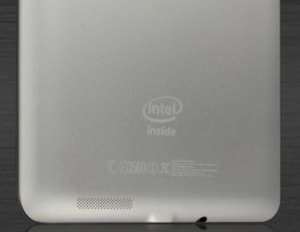 It might not look like much but, build makes a lot of difference to the overall quality of a device. The better something feels when in use, the better the product’s image. Let’s not forget that the Nexus 7’s price tag is what drew many people in but, if the build quality were terrible then it wouldn’t have caught on like it is.

ASUS’ FonePad is said to be packing a 7-inch IPS display at 1280 x 800, an Intel Atom Z2420 at 1.2Ghz and Power VR SGX540 taking care of the graphics. Certainly not what you’d consider high-end on the processor front but, Intel’s CPUs have proven themselves to be more than capable and they’re more than enough power for web browsing and everyday use.

I’m excited to see what ASUS have up their sleeves when it comes to the FonePad and hopefully, they can deliver a well-priced tablet that’s also well-built.