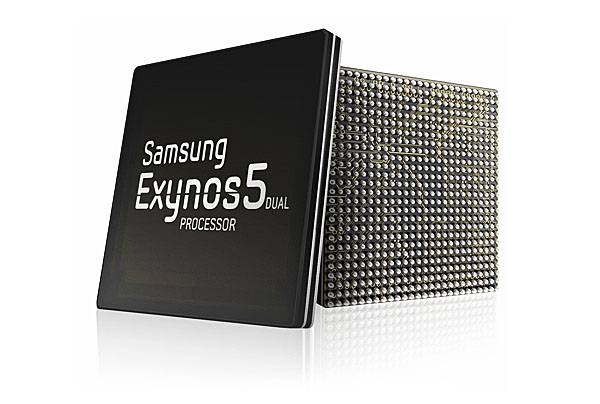 We have long heard reports of the new Samsung Exynos 5 Octa and how it will use of ARM's big.LITTLE architecture to combine the benefits of high performance A15 cores with the energy efficiency of the A7 cores to create a chip the perfect blend of power consumption and performance for premium high end devices. Now at MWC despite production issues that Samsung has been facing, Phone Arena were lucky to see this new design in action.

As expected the cores are intelligently toggled on and off depending on the system load, and you can see in the graphic in the video below, the cores are switched instantaneously, meaning there will neither be any sluggish performance, or excessive heat and power consumption. The dynamic switching of the cores is controlled by the Linux kernel on the phone, which means developers of custom kernels will be able to tweak these settings to further maximise performance and/or power efficiency as the development community provides a much wider resource for optimisation that can then be pushed onto everyday consumers.

The Exynos 5 will also be coupled with the PowerVR SGX544MP3 that has up to a 70% performance increase of previous generation Exynos processors. Samsung is planning to release these chips in Q2 of this year, but they will be facing stiff competition from Nvidia's Tegra 4, Qualcomm's Snapdragon as well as LG and Huawei who are both expecting to be fielding their own chips based on ARM's big.LITTLE concept and of course Intel who will be the only company to field a chip that isn't based off an ARM design. While it's too early to tell who will become the leading chipset manufacturer of 2013, the competition is definitely hotting up.

It looks like the Galaxy S IV is going to miss out on the Exynos 5 Octa but, it might well make it to the Galaxy Note III which would certainly be a better fit for this processor.