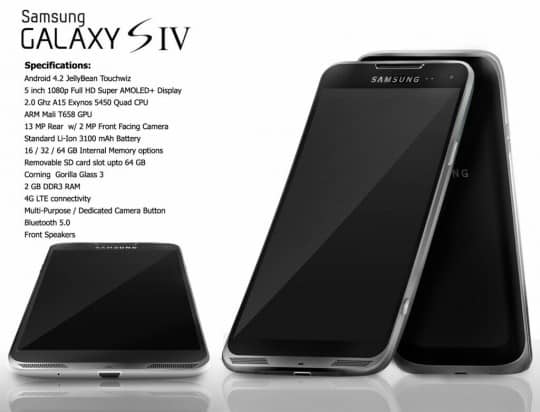 Well you know it's getting close to the release of a new device when you see renders and rumors popping up almost daily. The latest render shows a metal feel for the next iteration of the Galaxy S line. The new render also gives us some specs, which are pretty close to what we've already heard, and this render says we'll see a larger battery. Which is always good to see. Those specs include:

Now we have to remember here that this is a render, and more than likely not the final design of the Galaxy S4, although if it was I'd love it. I really think it looks nice. It also looks like there are no physical buttons, besides the volume rocker, camera button and power button. Which means we've finally gotten rid of that home button, and getting soft keys. Then you've got the dual front speakers which look really nice, and I'm sure the sound is going to be even better. I wonder if this will have wireless charging which has been a popular feature in Android news lately. Although it's kinda confusing since you still have to plug the wireless charger in.

We've already seen other renders of the Galaxy S4, and this looks nothing like it. The other renders look a lot like the current Galaxy S3 but a bit bigger. Personally I'd rather have this metal render than a bigger Galaxy S3. We've said this already, but this is a render, so we have to take this with a grain of salt. But that doesn't mean we can't sit here and drool over what could be the Galaxy S4 right?

What do you think of this render? If this was the Galaxy S4, would you buy it? Let us know in the comments below.