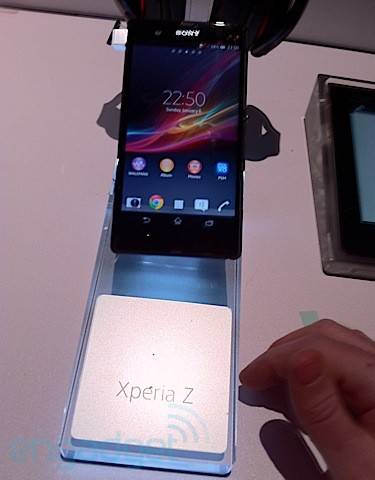 CES doesn't officially start until Tuesday, but that doesn't mean we won't have plenty of news between now and then. We have NVIDIA's press conference in about 5 hours and a whole lineup of press conferences all day tomorrow, which you can get all the news right here at Android Headlines. Now the Sony Xperia Z, we've heard and seen plenty of leaks of this device. Going all the way back to it being called the Odin and Yuga. The Sony Xperia Z is that 5-inch 1080p device we've heard about from Sony. It actually looks pretty great and has some awesome specs accompanying it. Here are the rumored specs, we should know the actual specs at Sony's press conference tomorrow night. That starts at 5pm PST/8pm EST.

As you can see from the image taken above from Engadget, it does look like a pretty decent phone. And are those on-screen keys? It's hard to tell, I'm definitely hoping they are. Many people are thinking this is going to be Sony's year. I have to agree with them. With many of the big companies not releasing anything flagship-ish at CES this year, and some won't even be there. It's all down to the smaller manufacturers like Sony, ZTE, Huawei, etc. Samsung is there, but not expected to announce anything flagship. Probably a bunch of low-end to mid-range devices for different US carriers. Which we'll be hearing from them tomorrow as well.

So tomorrow night, don't forget we'll have all the information for you, shortly after our podcast which starts at 4pm PST/7pm EST. Be sure to join us as we will be talking CES. So who's interested in the Sony Xperia Z? Let us know in the comments below.