According to a new leak, the Sony Xperia Tablet Z we wrote about yesterday, might be becoming official next week in Japan. It appears that NTT DoCoMo in Japan will be announcing is on January 22nd. The ‘docomo smartphone lounge‘ has revealed that people will be able to see the Xperia Z and Xperia Tablet Z from Wednesday, January 23rd to Sunday, January 27th. This is also following the formal announcement of other new devices for NTT DoCoMo in Japan on January 22nd. This appears to be the day that Japanese carrier NTT DoCoMo will be showcasing their new Spring 2013 devices. So if we do see the Xperia Tablet Z next week in Japan, I’d expect an announcement from Sony at Mobile World Congress in Barcelona next week. 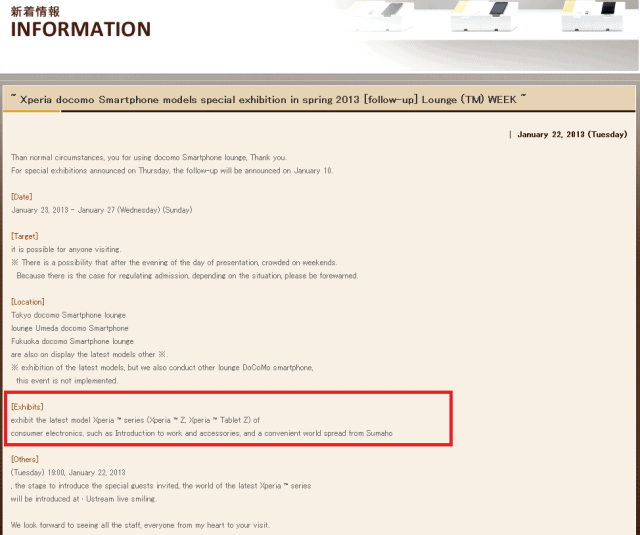 The leaked specs for the Xperia Tablet Z include:

This is looking like a great tablet. The Snapdragon S4 processor is a great processor, and it’s used in many other devices available right now. Including the HTC Droid DNA/Butterfly/J Butterfly, Nexus 4, LG Optimus G and a few others. But that 6,000mAh battery should be able to keep you going all day, even with it being connected to LTE. It would be great for Sony to launch both the Xperia Z and the Xperia Tablet Z on all the US carriers within weeks of each other. But I’m not sure Sony has the guts that Samsung does and can pull this off.

The Xperia Tablet Z looks like a great device. Coming from someone that has never had or even played with a Sony mobile device, I’m definitely thinking about picking up this tablet or the Xperia Z. Sony has really pulled out all the stops so far in 2013, and I think they could bring some real competition to Samsung. Would you buy this tablet from Sony? Let us know in the comments below.