While the smartphones of CES might have been disappointing it looks like Samsung is more than happy to give us a taste of what the futurer of device like smartphones might hold. Rumors had been doing the rounds that Samsung were going to unveil their flexible display technology at CES this year and just now they’ve done that. Not only have announced advances in the technology but they’ve also christened their new leap in display technology. Say hello to “Youm”.

So, while it’s not the best name they could have chosen, the technology itself is pretty exciting and could have some stunning implications for the mobile space. This new OLED technology is flexible, allowing the screen itself to fold, bend and perhaps even become unbreakable. What’s fascinating about this technology is what it could mean for devices going forward, what Samsung are showing off here is real stuff of the future – perhaps something that will give you the line “I remember when these displays were new!” Okay so, maybe this whole flexible OLED thing isn’t quite that important but, Samsung seem to be pretty proud of it. 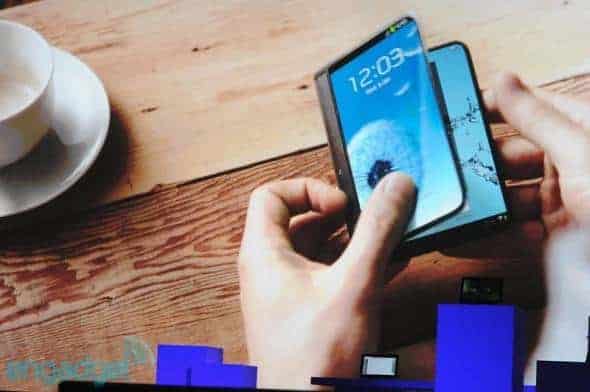 Proud of it enough to show off a new concept device of it. The folks over at Engadget are lucky enough to be the in the audience right now and are reporting that Samsung had demoed a device that featured an OLED display that spanned outside of the device’s frame, in a manner which allowed notifications to be read with the phone laid flat against a table. All of this is a little difficult to explain but Engadget have reported a concept video was shown off at the event as well, if Samsung ever make the video public then we’ll update this post so you can get better understanding on Samsung’s futuristic tech. 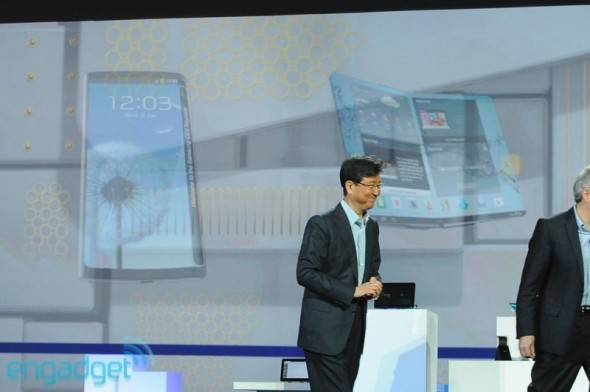 Out of the two announcements from Samsung that pertain to the mobile space – the other being the incredible Exynos 5 “Octa” – this is perhaps the more exciting of them. While there’s little info to suggest that we should even expect these displays within 3 years or so, it doesn’t make this sort of stuff any less awesome. We’ve not got too much information on the whole thing right now but when we get more, we’ll be sure to update this post.

Now, what we really want to know is, what devices can you imagine with flexible displays?