There were quite a few exciting innovations announced at CES 2013, but one of the more talked about announcements was Samsung’s new curved display technology.  This is not to be confused with Samsung’s flexible screen technology. Samsung had several concept phones on display. The first new design uses the curved display to essentially wrap around one side of the phone.

Besides the obvious advantages of allowing a bigger screen size in a smaller space, there are several ways that OEM’s or app developers could use this space to enhance your smart phone experience. The first and most obvious is the ability to keep your screen hidden behind a flip cover while still being able to see notifications, or even read texts. Remember that AMOLED technology would allow only that part of the screen to light up, saving precious battery life. But that is just the beginning. Remember when a gyroscope or NFC were considered superfluous features on a device? Who knows what kind of cool ideas will come from enterprising app developers in the near future that will take advantage of this unique form factor. 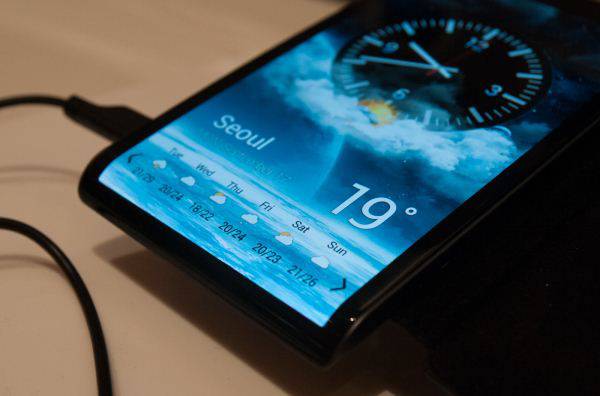 Samsung also showed off a similar design that had a curved screen along the bottom of the phone. Although the bend isn’t very extreme in these early models, it will be interesting to see what this technology will look like when it eventually reaches the open market. I wouldn’t expect to see any phones featuring this potentially ground breaking screen design in 2013, but hopefully we will be able to purchase a wide variety of curved screen devices in the near future.

Curved screens weren’t the only new ideas that Samsung had to show off at CES this year. We also got a glimpse into Samsung’s plans for the immediate future.  It appears that Samsung is planning to bring a full HD 1080p 4.99 inch screen with 440 PPI to the market in the first quarter of 2013. The Korean smart phone giant is also claiming to have technology that will decrease a screen’s power consumption by 25%. Of course, we will have to wait and see what, if any of these new innovations actually make it to the market, but is anyone else starting to wonder if the Galaxy S4 might be a really big deal?