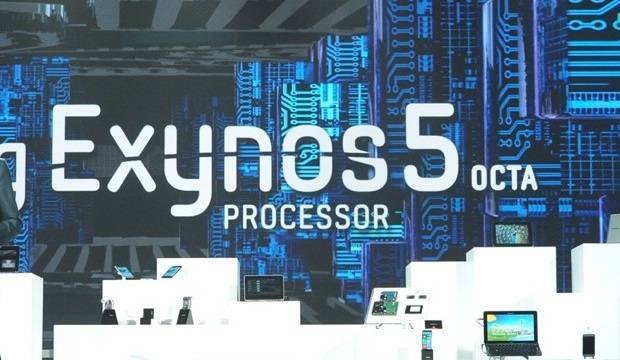 It's officially day 2 of the Consumer Electronics Show in Las Vegas. Samsung already had a keynote on Monday where they announced that the Galaxy Note 10.1 would be heading to Verizon with a huge logo of course, along with some camera, and other appliance announcements. Now Samsung has gotten up on stage for their second keynote. The smartphone manufacturing giant has just announced their new Exynos 5 Octa chip, which is based on the ARM big.LITTLE/Cortex A15 architecture. This new chip is designed to be a low powered, high performance mobile processor. Samsung is claiming that the 3D gaming performance is twice that of anything available right now. Dr. Woo gave a demonstration on stage which showed him searching for restaurants and watching an HD movie while singing the virtues of its extremely fast performance and power sipping capabilities.

The Exynos 5 Octa is built with 5 Cortex A15 cores and will be much faster than the Exynos 5 Dual that is in the Nexus 10 and the Samsung Chromebook. Which already have some pretty powerful chips inside. Samsung says that this new chip can cut power consumption by up to 70% compared to the Exynos 5 dual chip. Simply because it is able to tackle common jobs with the lower-voltage A7 cores, similar to what the Tegra is supposed to do with its fifth core. Samsung hasn't said exactly when we'll see this new chip in devices, but I'd be willing to bet it'll be in the next generation of the Galaxy S and Galaxy Note devices. Since they put LTE on the newer version of the Exynos 4, I'd expect it to be on board with this new Exynos 5 Octa.

This is one powerful chip, and when we do start seeing it in new devices from Samsung, it's going to be a beast! I know I can't wait to see it in the Galaxy S4 and the Galaxy Note 3, what about you? Let us know what you think of this new Exynos 5 Octa chip in the comments below.