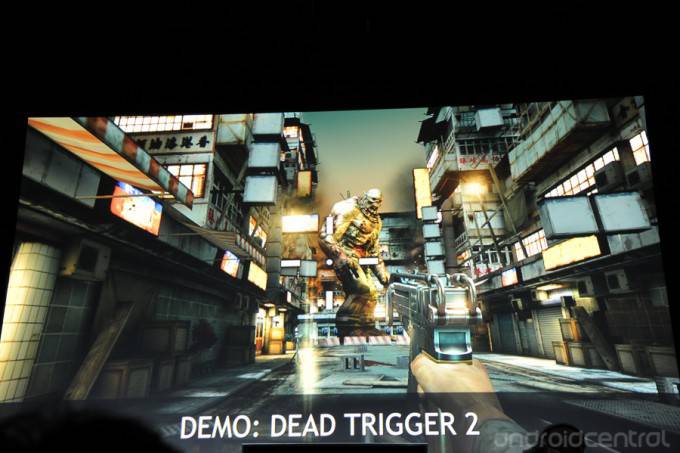 Nvidia still has their press conference on-going in Las Vegas right now. And to show off how great their new Tegra 4 chip is, they showed a demo of the next iteration of Dead Trigger. The original Dead Trigger was a huge hit on the Nexus 7, in fact during Google's Nexus 7 announcement, they showed off Dead Trigger on the Nexus 7. Most of you probably have a Tegra device laying around, especially since most of you have a Nexus 7 or one of ASUS' Transformer tablets. This is one of those Tegra games, that you'd find in Tegra zone. Of course it will be in the Play Store eventually too.

First Nvidia announced a new graphics card, then their grid, and then the Tegra 4 chip. Man Nvidia is really killing it tonight. What a great way to open up CES in 2013. Currently we have no idea when Madfinger will release Dead Trigger 2, but you can bet they'll be showing it off all week long at CES. So we expect to see some hands-on video and demo's of the new game. And possibly even a release date, we are hoping it's not too far away. I know I'm excited to get it and play, I'm sure I'm not the only one either.  This thing looks too awesome. Who's ready to buy Dead Trigger 2 now?

The original Dead Trigger was very popular, in fact it was so popular that it was pirated quite a bit and forced Madfinger to release it for free. Making it a free to play game with in-app purchases. Hopefully Dead Trigger 2 doesn't suffer the same fate, as Madfinger puts together some great games. Who's ready to get their hands on Dead Trigger 2? Let us know in the comments below.