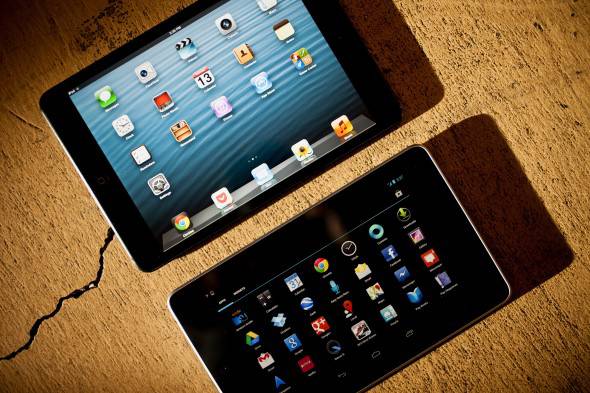 The Nexus 7 has enjoyed a lot of success and it still reigns as perhaps the best and best value 7" Android tablet on the market. Of course, that's here in the States and we always knew that an affordable Android tablet was going to work well, after all the Kindle Fire had a good year throughout 2012 and with the Play Store, Google laid out their own plans to create such a model. The Nexus 7 was finally launched starting at just $199, an HD display – at 1280 x 800 – and a quad-core processor all made an enticing package, indeed. Add all of that to the fact that the tablet is a Nexus through and through and there are no worries when it comes to updates and support.

What about elsewhere in the world? We know that Google has expanded the Play Store and its services – such as Google Music – to more regions, but what of the tablet, itself? Well, in Japan there is a recent survey that suggests the Nexus 7 is ding a lot better in the region than Apple's iPad is. Nikkei recently ran a survey covering 2,400 consumer electronics stores which tablet they would choose,the Lion's  share of the vote went to the Nexus 7 with 44.4 per cent and Apple's iPad just 40.1 per cent. So, that's not an overall advantage in favor of Google's tablet, but, it could present a trend emerging concerning price.

For a long time now, Apple have been able to command relatively high-prices when it comes to their electronics but now, thanks to low-priced tablets like the Nexus 7 it looks like their strategy is no longer working, like it always has in the past. In Japan, the Nexus 7 is $100 cheaper than even Apple's "more affordable" iPad Mini and while the survey did not a "shortage" of iPads in Japan the overall feeling is that price has a bigger impact than first thought.

I'm very much inclined to agree, after all why wold the average consumer pay more money for something when it does eveything that they want it to just the same? Of course, there are always going to be those to go for Apple hardware as a result of their reliability and solid build but, it looks like te average consumer is embracing technology from everywhere and not just the one supplier, or at least they are in Japan.