It’s the start of a new year and with that comes a lot predictions and forecasts to come but, traditionally January is the start of it all for the tech world. With CES just around the corner and Mobile World Congress following in February, the first few months of any year are big for tech and arguably big for the mobile side of things more than anything. Throughout last year we had heard little bits here and there about Ubuntu for Android, and Ubuntu expanding in general. The Linux distribution has gone from being something that more and more users are downloading for their PCs to running on TVs to being shoehorned onto tablets like the Nexus 7. It’s a safe bet to say that 2012 was a good year for Ubuntu and some of the most intriguing developments surrounding it came in the form of Ubuntu for Android.

Running the same kernel, Android smartphones with Ubuntu on them would be able to double as a fully-fledged PC with Desktop Ubuntu running on it, ouputted to a monitor or TV. It’s an interesting concept for sure, and one that could well take off thanks to the vast amount of software for both Ubuntu and Linux on ARM. As the latest Chromebook from Samsung – with its Exynos 5250 CPU – has proven, ARM processors are getting closer and closer to running lower-end desktops with each and every new chip. 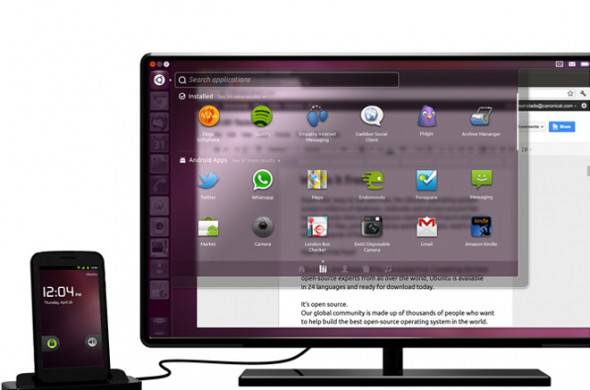 Recently news has broke that Ubuntu have a little announcement for us today, to kick off the New Year. We’ve all been wondering what it could be and at this stage it could be anything. Canonical has a little teaser for us on the Ubuntu website, with the tagline of “so close, you can almost touch it” so, this narrows it down a little bit – you’ll be able to touch it. Still, the announcement could me a number of things, there are whisperings that this could be an Ubuntu tablet, running a refined version of the Unity interface. This is something I doubt as Unity really isn’t ready for touch in its current form and there’s been no developments on a tablet UI of any sorts – at least not one that we know of.

As Android Headlines’ resident Linux guy, I’m very interested to see what they’re going to be announcing and if it some form of integration with, or even a product running, Android then I’ll be pretty happy, indeed. To see Linux get this sort of traction in the mobile world is exciting and Canonical could certainly make a go of it as they’ve proved that with Ubuntu, the right vision and a solid structure for development, can do anything. As always, we’ll have the latest news for you when it finally breaks later on today.

What do you think Canonical has in store for Ubuntu and more importantly, what would you like to see?