Recently, an interview with one of HTC’s top exec’s revealed that their deal with Apple would help them in 2013. While we agree, we also disagree. That’s because they can use some of Apple’s patents but also have to pay an Apple tax. But at least in 2013, HTC will be able to innovate instead of litigate, something Apple has forgotten how to do.

But the latest leak for HTC was the M7. Which is supposed to be a pretty highly spec’d device with a 4.7-inch display similar to the One X and One X+. Currently HTC’s newest device is the Butterfly/J Butterfly/Droid DNA which isn’t yet available in every market yet. But we have some new information about the HTC M7, from none other than Football himself. For those that don’t know Football, he’s a pretty reputable tipster. He leaked basically the entire Droid DNA for us back in October and November. Here’s what he tweeted: 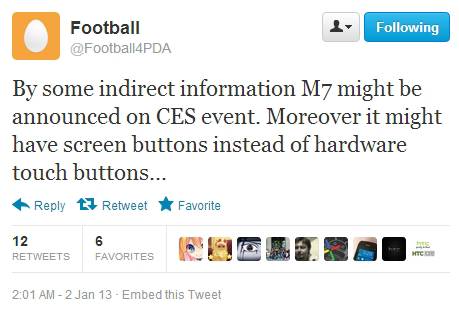 So on-screen buttons, it’s about time HTC. But having the M7 announced at CES might be the best thing for HTC. We all know that CES is going to be kinda quiet for Android, and Mobile World Congress, everyone will be there announcing new stuff. So by HTC announcing at CES, it gives them the spotlight.

The M7’s rumored specs so far are:

It’s kinda surprising that the HTC M7 is supposed to have a larger battery than the HTC Droid DNA has, and the DNA has a larger screen. Well I don’t know about the rest of you, but the M7 definitely has my eye. Even though I’ll probably stick with my Galaxy S3, it certainly has my attention as a potential next device for me.

What are your thoughts on the HTC M7? Interested in it? Let us know in the comments below.