A new study was released, and later confirmed by Forbes that shows Google+ to be the second most popular social network on the planet. Google+ now has more than 343 million active users while Twitter is holding steady at 288 million users. Of course, Facebook is still number one at 700 million. But remember that while Google+ has been on a meteoric rate of growth for the last year and a half, Facebook and Twitter have both seen either declines or stagnated growth. Also, if you combine Google+ with Youtube’s 300 million active accounts suddenly Facebook’s lead doesn’t look so impressive. 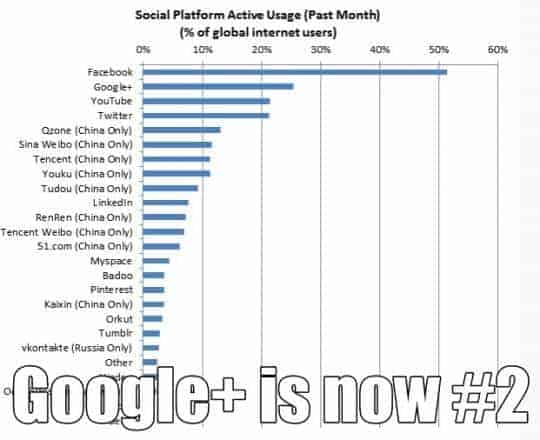 So it turns out Google+ wasn’t another Google Buzz or Google Wave. It isn’t, hasn’t ever been and probably won’t ever be a ‘ghost town’ and it is one of the fastest growing online services ever. I can’t tell you the number of ‘experts’ who have been proclaiming Google’s imminent failure to create an active social network. Many of these so-called experts said that there simply wasn’t enough room in the market for yet another social network. Its amazing how quickly so many forget companies like AOL, Myspace and Yahoo. Just because something is popular, and growing, doesn’t mean it will always be that way. And just because we are/were all using Facebook and Twitter doesn’t mean that we like them all that much. Complaining about the US Mail service didn’t start with the invention of email. The post office has always been known for terrible customer service, inconvenient hours and unreliable delivery. Email was simply the alternative that gave us all another boat to swim to when jumped ship on sending letters. And the exact same thing is true about Facebook. No one enjoys having to share everything that goes onto Facebook with your drinking buddies and your grandparents. The pointless character limit that Twitter imposed for so long for no apparent reason was a pain. And lets not forget that Facebook is a company that owns all of the content that is uploaded onto its social network. That means that the billions of photos and videos we share with each other are now owned and can be used with out compensation by the company that facilitated that transfer of data. Can you imagine if Google suddenly decided that it owns the rights to all of the emails you’ve ever sent via Gmail?

But Google+ is different. We are finally able to organize our online presence the same way we sort our offline relationships. We can make a comment about having a rough day at work and only share it with our family or close friends. At last we can actually share pieces of our lives that we don’t necessarily want the whole world to see with those we care about. All this, of course, is combined with a slick, user-friendly interface and ever-increasing integration with Google’s other services, and a dynamite mobile app. Yes, the future looks bright for Google+ and I can’t wait to see what happens next.