Well here’s an interesting tid bit. In case you didn’t believe all the rumors of the Motorola and Google X Phone, here’s a bit of confirmation that it is in the works. It appears, that good old Motorola has posted a new job listing on LinkedIn. Cool, right? But it’s not just any job. They are looking for “Sr Director Product Management, X-Phone” and of course this is in the San Francisco area where both Motorola and Google are currently located. The posting popped up on LinkedIn late last night, we aren’t to sure how long it’ll be up. But the original link is in the source links below.

So far nothing special is mentioned in the job description as to the device, but that’s not surprising. But what is surprising is that the job specifically mentions “X-Phone”, and one of the basic qualifications is “6+ years of mobile device experience with a proven record of successful launches.” So it looks like something, most of us thought was a myth may not be one after all. 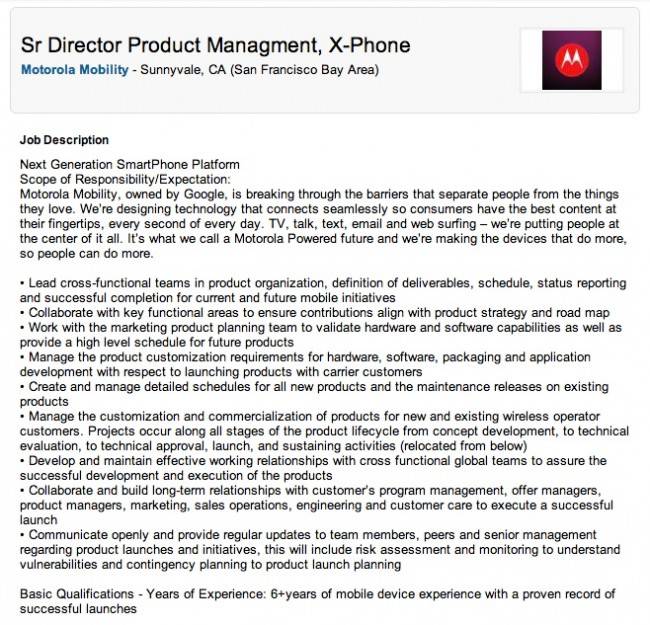 Some of the more recent rumors spoke of a multi-carrier launch, similar to the Galaxy S3, and Galaxy Note 2 in 2012. But the craziest rumor of all that we’ve seen for the X-Phone is the bootloader unlock fee for Verizon. They are saying that Verizon will charge you $15/month to unlock your bootloader, now that’s just crazy, but something I could see big red doing. You know how they love to squeeze every penny out of you. This phone is supposedly going to have some good looking specs, and run stock Android. Which, with Motorola’s recent devices, won’t be all that hard as their new skin is almost all stock anyways.

At this point, Google I/O is looking like it’s going to be huge this year. I don’t know about you, but I’m definitely excited for May 15th. We’re expecting to see the second generation Nexus 7 from ASUS, the Motorola X Phone, and probably some Key Lime Pie. We’ll have to wait and see. Who else is excited for Google I/O and the Motorola X Phone? Let us know in the comments below.