The Huawei press conference has just gotten started, and we already have seen the Ascend Mate. The Ascend Mate is that 6.1-inch device that we’ve seen so many rumors of in the past couple of months. Huawei is also showing off the Ascend D2, which is a 5-inch device with a 1080p display.

Here are the Ascend Mate’s specs: 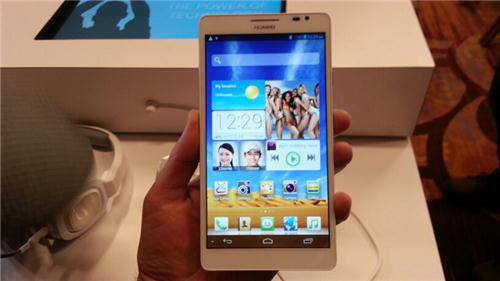 As you can see in that picture, the Huawei Ascend Mate is pretty big. And what is that I see there? Are those on screen buttons? They sure look like it! It’s about time we saw some other manufacturers (besides Google-owned Motorola) put these in their devices.

Of course as standard with CES press conferences, no information about when the device will be released or what carriers the device will be released on. But Huawei did state that they are moving away from their own branded unlocked devices, to OEM branded devices, which sounds like they are working with some carriers to get these devices out. We just don’t know if that means US carriers or other parts of the world. We’ll have to see, hopefully we’ll see some carrier announcements for the Ascend Mate in the next month or so. We don’t want Huawei to wait to long, or everyone will forget about this humongous device.

So that’s the Ascend Mate…..all of it. What do you think of the device? It is noticeably bigger than the Samsung Galaxy Note 2, which is already to big for some people. If the Huawei Ascend Mate hits your carrier, would you pick it up? I might not pick it up, but I’d definitely like to try it out. Might be to big for me, and most everyone else. Let us know what your thoughts are on the Ascend Mate in the comments below.

“The HUAWEI Ascend Mate breaks barriers to deliver a supercharged entertainment, communication and creative experience for all your personal and professional needs,” said Richard Yu, CEO, Huawei Consumer Business Group. “The HUAWEI Ascend Mate is an industry-leading smartphone and showcases our innovation as we continue to make great technology available to more people globally.”
HUAWEI Ascend Mate has a screen-to-body ratio of 73% – the highest in the industry – which maximizes your viewing pleasure for emails, documents, video or games. The 6.1-inch HD IPS+ LCD screen has a resolution of 1280 x 720 for unsurpassed clarity and color accuracy, and ‘Magic Touch’ which provides enhanced screen responsiveness even with gloves. The Ascend Mate is slim and stylish, designed to fit comfortably in a single hand at just 6.5mm thin at its narrowest part.
HUAWEI Ascend Mate features a 4050 mAh battery and Huawei’s Hi-Silicon 1.5 GHz quad-core processor. With Huawei’s QPC and ADRX smart power-saving technology, the smartphone provides up to two days of ordinary useage on a single charge. It has the fastest battery charging capability of smartphones in its range, which saves over 30% of battery charging time.
Together with global roaming functionality, the HUAWEI Ascend Mate supports five frequency bands making this smartphone perfect for international travelers. Its dual-antenna design supports high power data transmission and is optimized with maximum ratio combining method, to increase network reception by up to 2.5dB and providing an increase of 20 to 30% of overall network coverage.
Operating on Android 4.1 and featuring an 8.0-megapixel AF rear-facing camera with HDR and 1.0-megapixel HD front-facing camera, HUAWEI Ascend Mate also provides dual MIC noise reduction technology, Dolby® sound system and stereo recording. HUAWEI Ascend Mate features an Augmented Reality navigation application to help reach your destination, ‘smart reading’ functionality allowing quick reference to dictionaries, Wikipedia and Google Search pages, and ‘swift sharing’ to upload pictures, videos and other files two- to three-times faster than other smartphone users in a Wi-Fi environment.
Available in crystal black and pure white, the HUAWEI Ascend Mate will be on sale in China in Feburary 2013.