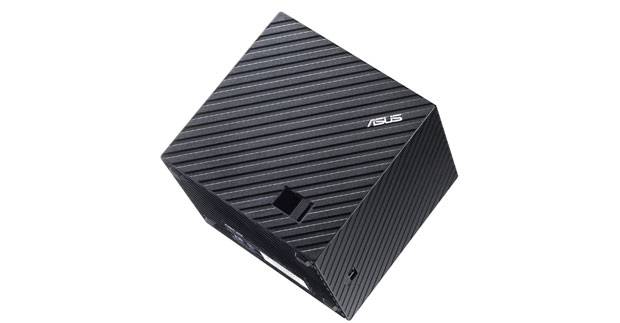 We've heard about the ASUS Qube back in November, and again earlier this month. And now in Las Vegas, ASUS has made the Qube official. This is ASUS' first Google TV device an is coming with 50GB of WebStorage cloud space and access to over 100,000 movies and TV shows through Netflix and Amazon Instant Video. It also has its own interface, appropriately named "Qube interface". There is also a motion-sensing remote control support for gaming and other apps, as well as the ASUS Mobile Remote app which can be downloaded to your Android phone or tablet. So far there's no word on pricing or availability. Hopefully it can compete with the new Hisense Pulse and the Vizio Co-star.

ASUS doesn't have a press event at CES this year, but we should see the device on the show floor later this week. So the Qube doesn't look as cool as the Nexus Q, but I bet it'll be available longer than the Nexus Q. We are hoping that 2013 will be the year of Google TV. As it was pushed heavily when it first came out and kinda died off afterwards. Let's see what type of Google TV products we see at CES this week, we're hoping for something good.

So what are your thoughts on the ASUS Qube? Let us know in the comments below. We also have the full press release below for more information.

Instantly add Google TV to your HDTV with the ASUS Qube. Qube with Google TV offers both motion control and voice search that integrates Google Play, Chromeâ„¢, YouTubeâ„¢in one compact device. With access to over 100,000 movies and TV shows* from Netflix and Amazon Instant Video, plus numerous apps, videos and games from Google Play, ASUS Qube with Google TV is the perfect media content device.
ASUS has developed the unique Qube interface, which displays functions via a rotating on-screen cube shape. The advanced remote control supports motion sensing for gaming and other applications. Customers can also control Qube with Google TV from their Android smartphones and tablets using the Mobile Remote app, available through Google Play. ASUS includes 50GB of WebStorage cloud space with every Qube with Google TV.